Mazovia has a recipe for clean air

Fighting smog and freeing the inhabitants of Mazovia from the negative impact of harmful substances that circulate in the air is one of the most important tasks that the voivodeship authorities have set for themselves for the coming years. Although the fight against smog is more like a marathon than a sprint, it does not mean that we have to wait for years to improve air quality. Examples of actions taken by Mazovia show that the results can be achieved in a shorter time perspective. What has to be done is to act consistently, decisively and involve the widest possible group of stakeholders in the fight: from non-governmental organizations, municipal authorities, to the inhabitants themselves. 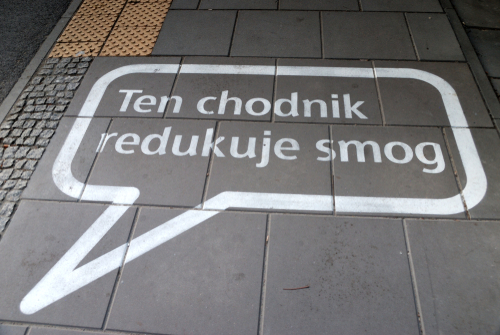 Air quality has a key importance for our health. Air pollutants have a negative impact on the circulatory and respiratory systems of humans, increase the risk of developing lung, throat or laryngeal cancer, lead to a number of other diseases and, consequently, to premature death. That is why its quality is so important. Unfortunately, the air we breathe every day contains many pollutants that threaten our health.

The particularly hazardous are the smallest fraction of dust – the particulate matter, so-called PM2.5. It is estimated that due to prolonged exposure to its action the life of average resident of the European Union is by about 8 months shorter. Due to  increased dust pollution in our country the life of statistical inhabitant of Poland is by another 2 months shorter than that of the inhabitants of other countries in the European Union. What does this mean for us? Every year about 6 thousand inhabitants of Mazovia die because of poor air quality. More than half a million visits to specialists, 12 thousand new cases of hospitalization, are only some of the consequences of smog-induced diseases.

Unfortunately, the most vulnerable groups include children, also in the prenatal period, as well as people with cardiovascular and respiratory diseases and the elderly people. Air pollution is also important in the face of the pandemic - in places where there is high concentrations of harmful substances in the air, the human body is exposed to attack from two sides – both, long-term exposure to air pollution and virus actions affect blood and respiratory systems. The risk of mortality is therefore higher - as many as 28% of deaths from COVID-19 can be linked to long-term exposure to air pollution.

For the sake of air quality and thus in order to prevent a negative impact of air pollution on the health of the inhabitants of Mazovia, the Self-government has undertaken a series of actions over the past years.

In September 2020, the Mazovian Regional Assembly adopted a new Air Protection Program for Mazovia (Resolution No. 115/20 of the Mazovian Regional Assembly of September 8, 2020 on an air protection program for zones in the Mazowieckie Voivodeship where the permissible and target levels of substances’ presence in the air were exceeded).  It defined the most important goal: improving air quality in the Mazowieckie Voivodeship. It will be achieved if we obtain sufficiently  low and safe levels of harmful substances in the air. The program contains detailed descriptions of air condition and air quality forecasts in the region, as well as answers to the questions that bother us:

Each Mazovian municipality is to carry out an inventory of boilers by 31 December 2021. Moreover,  the Program obliges municipalities to replace every year a specific number of boilers on their territory. In places where the replacement of boilers will not bring the expected effect green plantings are to be carried out. In addition, measures have been identified to help reduce emissions, i.e. carrying out an adequate number of inspections of furnaces, prohibition of incineration of waste and plant residues, organizing  an adequate number of educational activities. In addition, wet street cleaning is to be carried out in urban municipalities. Furthermore, the capital city of Warsaw, as impact of transport has there an essential importance for air quality, should implement the following actions:

The corrective actions set out in the Programme will be implemented by the end of 2026.

Tasks of each of our inhabitants

In order to help meet the objectives of the Air Protection Program each inhabitant of Mazovia has the task of: 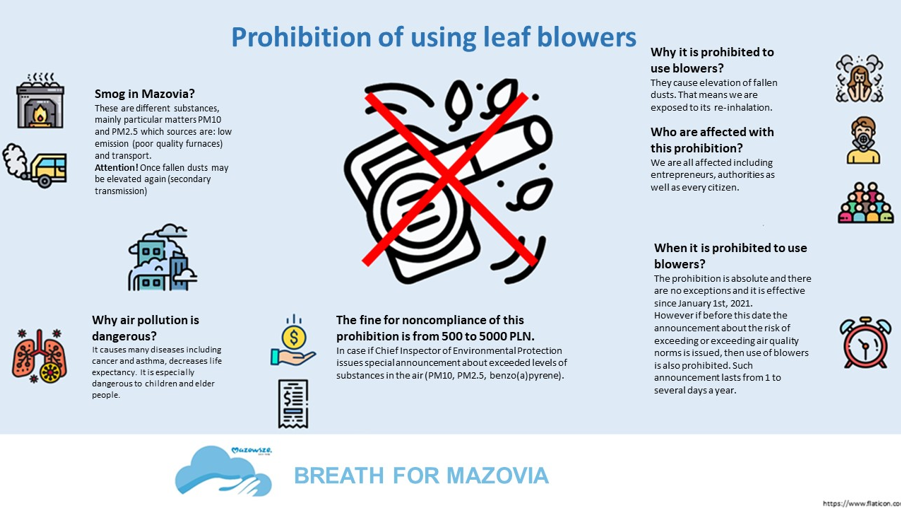 These were long-term actions, but air pollution includes also one-off and short-term episodes, very dangerous, during which it’s needed to act quickly and radically. In such situations, the Short Term Action Plan must be launched. It is an integral part of the Air Protection Program. It indicates how to react to the risk of exceeding air quality standards (during the period of validity of special alert notification), for ex.: do not ventilate rooms, avoid physical effort outside, take particular care of people from vulnerable groups, i.e. pregnant women, children and elderly people. Undertaking these actions means for every inhabitant of Mazovia: 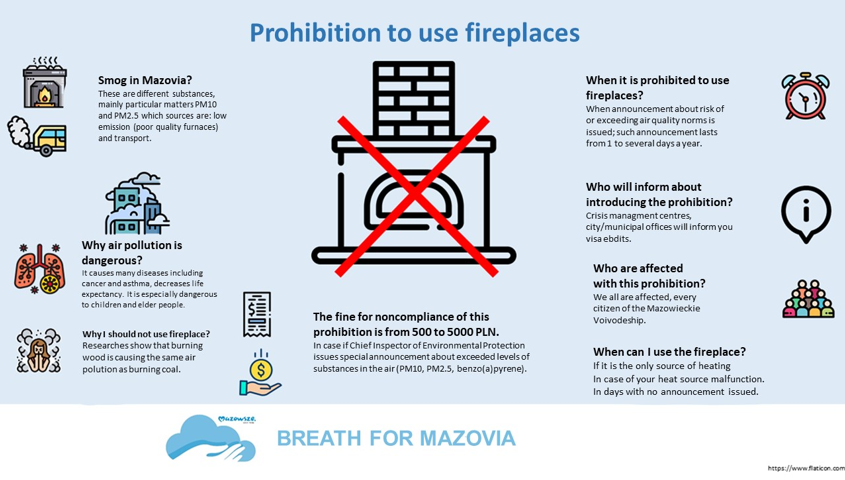 Is it the end of actions?

Are you wondering why the Self-government of the Mazowieckie Voivodeship has just started to work? It's not like that. Air protection programs have existed in the Mazowieckie Voivodeship since 2003, and have been developed since 2008. However, the Self-government has only now received from the legislator real tools to fight and enforce its provisions. That's not all, an anti-smog resolution - the local law act-  was adopted in 2017. In 2019 a subsidy program, addressed to municipalities, aiming at the implementation of remedial actions not covered by any other funding was launched. Extensive educational campaigns were conducted, including congresses organized in cooperation with non-governmental organizations.

Fighting for clean air is a marathon, not a sprint

Adopted by the Mazovian Regional Assembly in 2017 the, so-called, anti-smog resolution is another important tool at the disposal of the Self-government to improve air quality in Mazovia. The resolution applies to all inhabitants of Mazovia and introduces restrictions and bans in the Mazowieckie Voivodeship on the use of fuels, the combustion of which causes the highest emissions of pollutants into the air. These bans apply to coal and wood. Besides, the anti-smog resolution introduces an obligation for inhabitants to replace old non-ecological stoves. The replacement is to be carried out in stages, so that, from 2028, only stoves meeting the relevant emission requirements will remain in use in Mazovia. Its first effects will already be noticeable in 2023, because from November 2017 only stoves meeting the eco-design requirements can be installed. By the end of 2022 the most emissive heat sources are to be replaced. 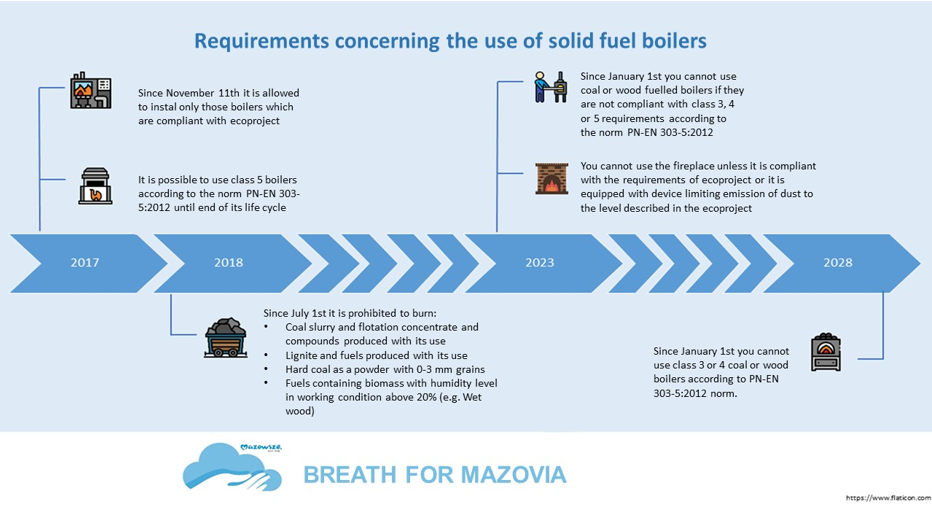 Evolution of activities - updating of the anti-smog resolution

Currently, work has also started on tightening the anti-smog resolution, within which analyses and consultations with Masovian municipalities, non-governmental and scientific organizations are beeing carried out. In February 2020, during the 3rd Clean Air Congress, the Self-governments of the Mazowieckie Voivodeship and of the Capital City of Warsaw signed a declaration on taking action to contribute to developing a proposal to tighten the provisions of the anti-smog resolution. The result is to eliminate solid fuels used in individual heat sources in Warsaw.

Bans and orders are not enough 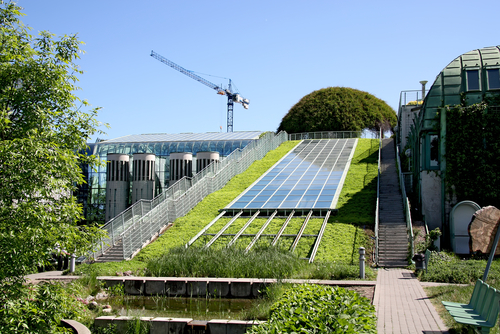 Since 2019, the Self-government of the Mazowieckie Voivodeship has been implementing a program supporting Mazovian communes in activities aimed at the air protection - "Mazovian Air Protection Support Instrument". During two years of the program implementation, the Self-government of the Mazowieckie Voivodeship allocated nearly 31 million PLN to support municipal activities aimed at improving air quality. The municipalities received support for activities such as: inventory of heat sources, educational and information campaigns, creation and revitalization of green areas, purchase of a drone to test smoke composition, purchase of air quality sensors and air purifiers. In 2020, the support under the "Masovian Air Protection Support Instrument" program was also provided for the implementation of measures resulting from the obligations imposed on municipalities by the provisions of the Air Protection Program. Financial support will continue in 2021. We already invite Mazovian municipalities to participate in the program and to implement measures aimed at the air protection with the support of the Self-government of the Mazowieckie Voivodeship. To do this you need follow our dedicated airborne web platform.

The cooperation in the field of air protection with non-governmental organizations is very important for the Self-governemnt of the Mazowieckie Voivodeship. We implement it on many levels, among others, when consulting and collecting opinions on strategic documents such as the Air Protection Program, when working on tightening the anti-smog resolution, when shaping pro-ecological social attitudes by organizing educational campaigns. From 2018 thanks to subsidies from the budget of the Mazowieckie Voivodeship, which exceeded the amount of  311 thousand PLN, under the Program of Cooperation with Non-governmental Organizations and Other Entities Conducting Public - Benefit Activities, non-governmental organizations carried out 19 information campaigns and educational activities addressed to inhabitants of Mazovia on air pollution and air protection issues. This cooperation is continued in 2021.

In order to create space in which the cooperation of various backgrounds concerned by fighting for clean air could be established, as well as to reach the largest possible group of people interested in the subject of air protection, Self-government of the Mazowieckie Voivodeship organized  in 2018-2020 the Clean Air Congresses. The three editions of the event were attended by over 1.300 people, including local government officials, scientists, representatives of business and non-governmental organizations. The topics of the congresses cover comprehensively issues related to air pollution – starting with  discussion of strategic documents and ending with discussion on activities in the area of municipal and household sector, transport, financing and the role of organizations and social movements, as well as on  the media and artistic circles. The Congress is also a space to discuss solutions, the implementation of which may effectively improve air quality. The participants agreed that social awareness of air pollution dangers is still too low. The 4th edition of the Clean Air Congress will take place in March 2021. We invite already all interested parties to participate in this event. Information on the Clean Air Congress is available on the website.

The recipe of the Mazowieckie Voivodeship is based on the constant striving to implement specific, effective solutions, developing the existing ones and setting new directions, verifying the results obtained and supporting the implementation of activities. Get involved in our activities for clean air - by taking care of the air, you take care of your health and that of your loved ones. 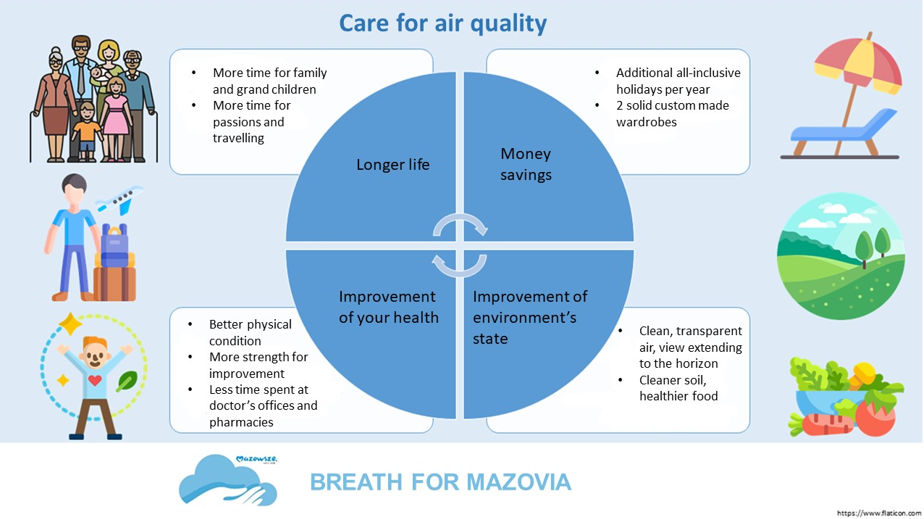 Are you willing to know more?

More detailed information on activities undertaken by the Self-government of the Mazowieckie Voivodeship to improve air quality, as well as many other pieces of information on the air pollution and air protection issues are available on the dedicated to this subject website.

Author: The Office of the Marshal of the Mazowieckie Voivodeship in Warsaw