Hydropower plants: still a lot to do

Large hydropower investments on the Oder and Vistula rivers provide significant opportunities for increased electricity generation, but sometimes cause concern among environmentalists. From an environmental protection point of view, it is important to support the construction of small facilities.

At the end of 2019. Poland had 771 hydropower installations with a total installed capacity of 973 MW. The water and energy potential in Poland is estimated at 11.95 TWh (a terawatt hour is one billion kilowatt hours, and a kilowatt hour is as much electricity as a 100-watt light bulb consumes in 10 hours). Comparing the estimated potential with the volume of electricity production in Poland, it can be determined that this potential is only used by about 20%. Other estimates indicate an even lower figure of 12%.

Environmental organisations have objections about the construction of water stages as permanently changing the character of rivers. Among other things, they are protesting against the construction of the Siarzewo barrage on the Vistula, citing the refusal of a permit to build the facility issued in 2016 by the Regional Director of Environmental Protection in Bydgoszcz. With respect to  the native fish species, the loss of habitats in oxbow lakes and in the riparian zone of the river will be the greatest negative impact associated with inundation of the free-flowing Vistula River section with the reservoir waters, rise of water level, and consequent changes in the morphology of the river bed and banks.

PGW Wody Polskie argues that modern technologies currently used in the construction of hydroelectric power plants cause limited losses in the environment. However, a significant proportion of rivers in Poland, due to their low gradient, have little potential for construction.

The construction of small hydropower plants is environmentally beneficial. However, the Small Hydropower Development Society believes that it is necessary to maintain a system of fixed prices and guaranteed subsidies. The 15-year support period for renewable energy sources ended at the end of September this year for more than half of Poland's existing small hydropower plants – 400 installations with a total capacity of over 127 MW. 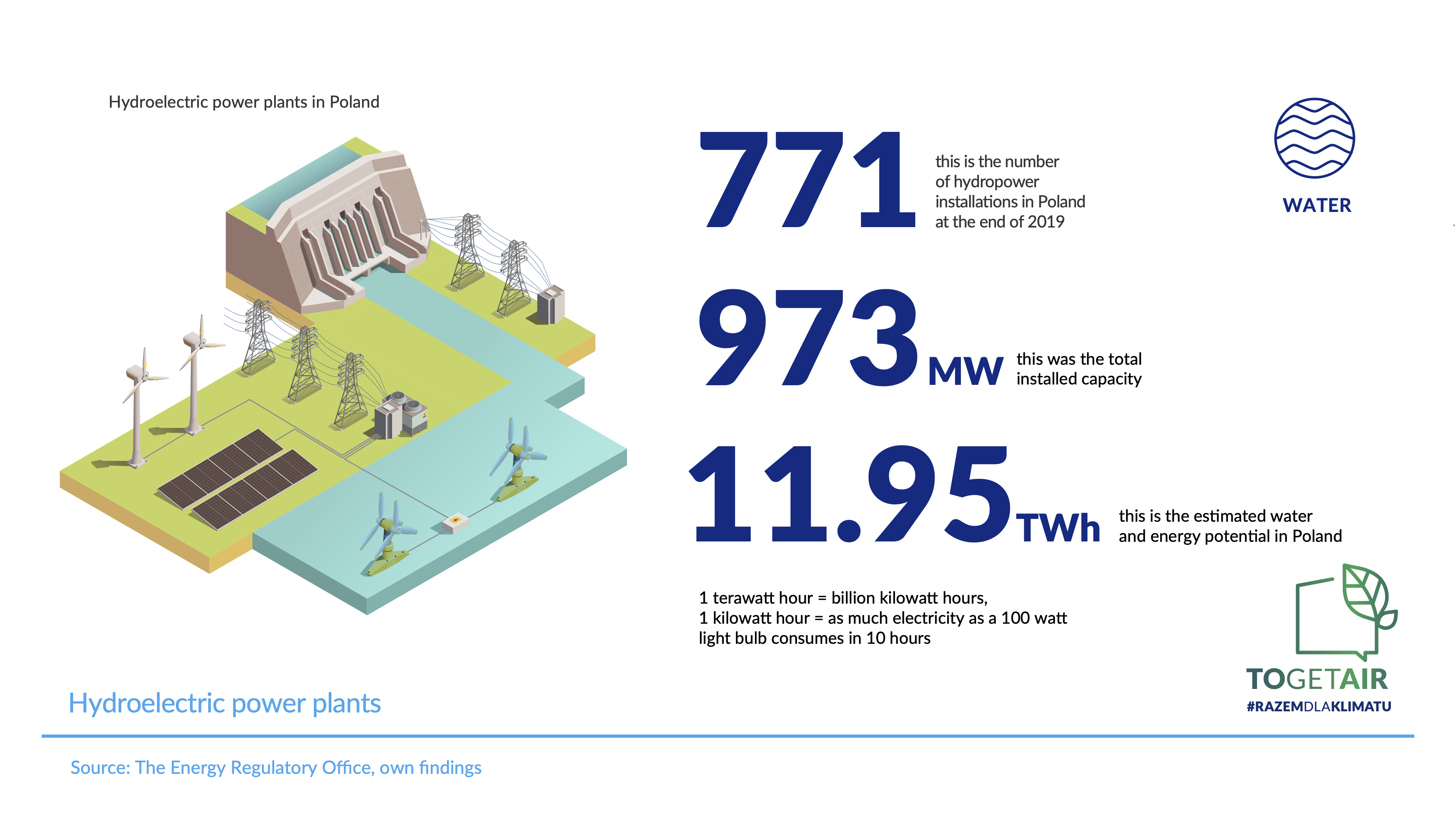 One of the measures that will support the development of hydropower in Poland is the upcoming programme for the construction of small hydroelectric power plants (SHPP) using dams owned by the State Treasury. The largest possible number of locations is to be selected where the State Water Management Company Wody Polskie (PGW WP), as the investor, will undertake the construction of such facilities. There are currently 93 potential sites in the project, but the list is not exhausted. Most of these (forty) fall into the range with an estimated capacity of up to 0.5 MW. Of the 32 sites where capacity has not been estimated, the majority will also be in the range up to 0.5 MW, with some individual sites in the 0.5 to 1 MW range. 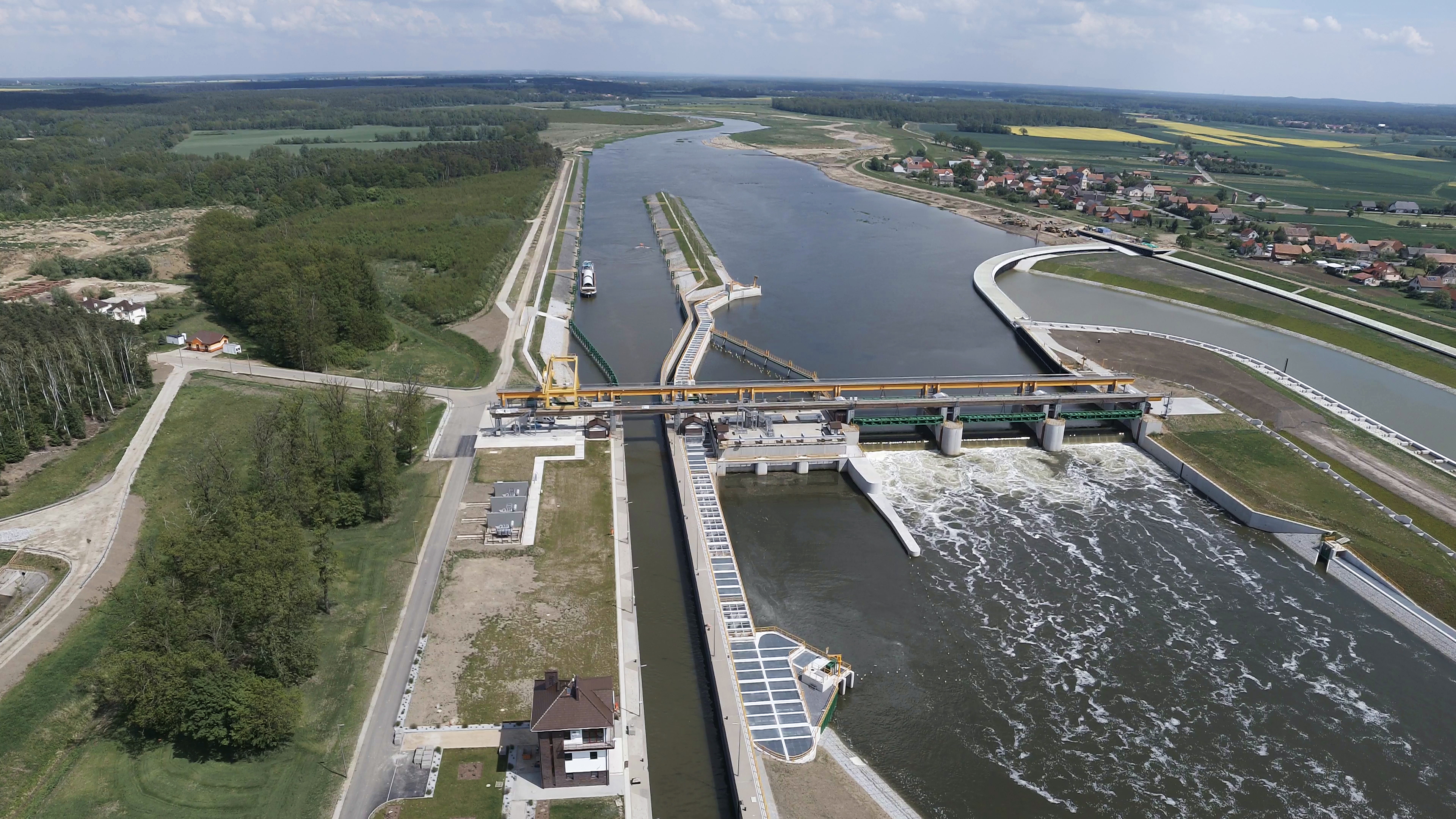 Out of concern for the achievements to date

In Poland, as in many other European countries, there are many neglected, disused and ruined waterwheels which in the past powered mills, sawmills, fulling mills, puddling plants, etc. There is untapped hydropower potential in these facilities. In the 1930s, there were around 8000 different types of installations using waterpower in Poland, and today there are more than 10 times fewer in operation.

At the same time, it is worth taking care of the facilities already in operation. As a result of the efforts of the Association for the Development of Small Hydroelectric Power Plants, a solution is currently being prepared in the Ministry of Climate and Environment to be included in the amendment to the Renewable Energy Sources Act. It provides for a two-year extension of the right to benefit from the feed-in tariff (FIT) and feed-in premium (FIP) systems currently enjoyed by the majority of small hydropower plants with an installed capacity of less than 1 MW. This would remove the risk that a substantial proportion of these installations would go out of business due to lack of support.

From concept to completion

A number of large investments on the Oder and Vistula rivers, including the construction of multi-purpose reservoirs, barrages and hydroelectric power plants, are either under way or planned. Reservoirs protect against floods and droughts, provide water for inland navigation but, also, once the water is dammed, provide power for power stations. The most advanced is the Malczyce barrage, an important element of the Oder Waterway – the cascading of the river, which will allow the full use of its hydropower potential, as well as the creation of a green waterway, the raising of groundwater levels, and retention in reservoirs. The construction of a dam in Malczyce has recently been completed 20 years after work began. However, further infrastructure development is required – an investment was announced by Prime Minister Mateusz Morawiecki last May. Among other things, it is planned to increase the damming level so that the Malczyce barrage becomes an effective support for the Brzeg Dolny barrage, which is threatened by flooding and loss of stability. The basic parameters of the planned hydropower plant in Malczyce are as follows: installed capacity – 10.665 MW; estimated production of "green" energy in an average year – 49.8 GWh. The power plant is currently in the process of obtaining an operating permit. The Malczyce barrage also allows for the retention of 5 million m3 of water in the Oder riverbed, thus counteracting the effects of drought.

The project will be continued with the currently designed Lubiąż and Ścinawa barrages, which will protect an entire section of the Oder River directly threatened by erosion and increase navigation and hydropower potential in subsequent sections. These investments are currently at the stage of preparing project documentation and are expected to be completed in 2027.

On the Vistula, the construction of the Świnna Poręba reservoir has been largely completed, with its main purpose being to safeguard and protect against flooding in the Skawa and Upper Vistula valleys. Power production at the hydropower plant began on 1 March 2019 when it was synchronised with the electricity grid. The total turbine capacity of the facility is 4.619 MW and annual production of more than 10 GWh is expected to be the target. The concept for the reservoir dates back to 1919-1920, when an expert study was commissioned by the government on the feasibility of building it in its current location. Gabriel Narutowicz, professor at the Zurich University of Technology, prepared studies on the main right-bank tributaries of the Vistula, including the Skawa. Research and study work had been going on since the 1960s, preparations for the investment began in 1984, and work started in full swing in 2003.

The Siarzewo barrage on the Vistula, the second cutting-edge hydrotechnical facility founded on the riverbed of this river, is at the design stage. The aim of the investment is to ensure the safety of the Wloclawek dam (where the only remaining barrage on the Vistula is located, as well as the hydroelectric power station, which is the largest run-of-river hydropower station in Poland) and thus reduce the flood risk in the region. As assured by PGW Wody Polskie, the Siarzewo barrage will not create a large reservoir such as, for example, the Zegrzyński Reservoir and will not block the flow of water in the river or significantly slow down the flow. The planned capacity of the hydropower plant is around 80 MW and annual production could reach around 400 GWh of electricity. However, the investment is stuck at the administrative decision stage, which is delayed by protests and appeals from environmental organisations. Their activists argue that the construction seriously interferes with the course of the river and is detrimental to  the native fish species.

Visualisation of the Siarzewo barrage