Waterborne transport is much less detrimental to the environment than road transport. The Polish economy can also benefit from the development of inland shipping. However, investments are necessary, among other things in fleet modernisation and construction of a connection between the Vistula and Odra –  argues the Ministry of Infrastructure.

One of the aims of the European Green Deal – the strategy for Europe to become the first climate-neutral continent by 2050 – is to promote and introduce more environmentally friendly forms of private and public transport. Inland shipping has immense potential in this area.

Water transport is more efficient than road transport – it is estimated that 1 litre of fuel can move 127 tonnes of freight over a distance of 1 km by riverboat compared with only 50 tonnes by road transport (97 tonnes by rail). An important advantage of inland waterway transport is the capacity of the river fleet. One large river vessel can replace dozens of road vehicles, helping to reduce road congestion and improve road safety.

Once our waterways achieve at least (international) Class IV navigability, to which Poland has committed itself1, they will eventually become part of the trans-European transport network TEN-T. One of the major goals for the development of this network is the decarbonisation of the transport sector – shifting 30% of road traffic to rail and inland waterways by 2030, and 50% by 2050. The development of waterborne transport will also solve the programme of limited road accessibility ("transport bottlenecks") due to road congestion. This makes access to seaports, for example, more difficult, hampering their development.

The low-emission and very low accident rate of inland shipping addresses the problems indicated by the European Commission2. The expansion of this branch of transport may serve to build and grow Poland's innovative economy. However, significant investment is needed in the development of the transport system and planning documents.

The expansion of inland waterways, apart from improving navigability, should take into account the functioning of river ecosystems, considering the impact of climate change on this ecosystem in the long term. When modernising existing infrastructure or building new infrastructure, it is important to remember that waterways are not just about transport. Drought prevention, flood risk reduction, social and environmental impact, and economic development of the regions should also be taken into account.

The systematic increase in the proportion of highly processed products and goods and, at the same time, the decrease in the proportion of bulk goods in transport is a serious obstacle to the expansion of inland shipping. The rapid growth of the service sector, which is characterised by a high degree of dispersion and fragmentation, has resulted in an increased demand for the transport of small batches of cargo – and this is where road vehicles are best suited. In a highly competitive market, the manufacturer's success is determined by its ability to deliver the product to the customer in the shortest time possible. 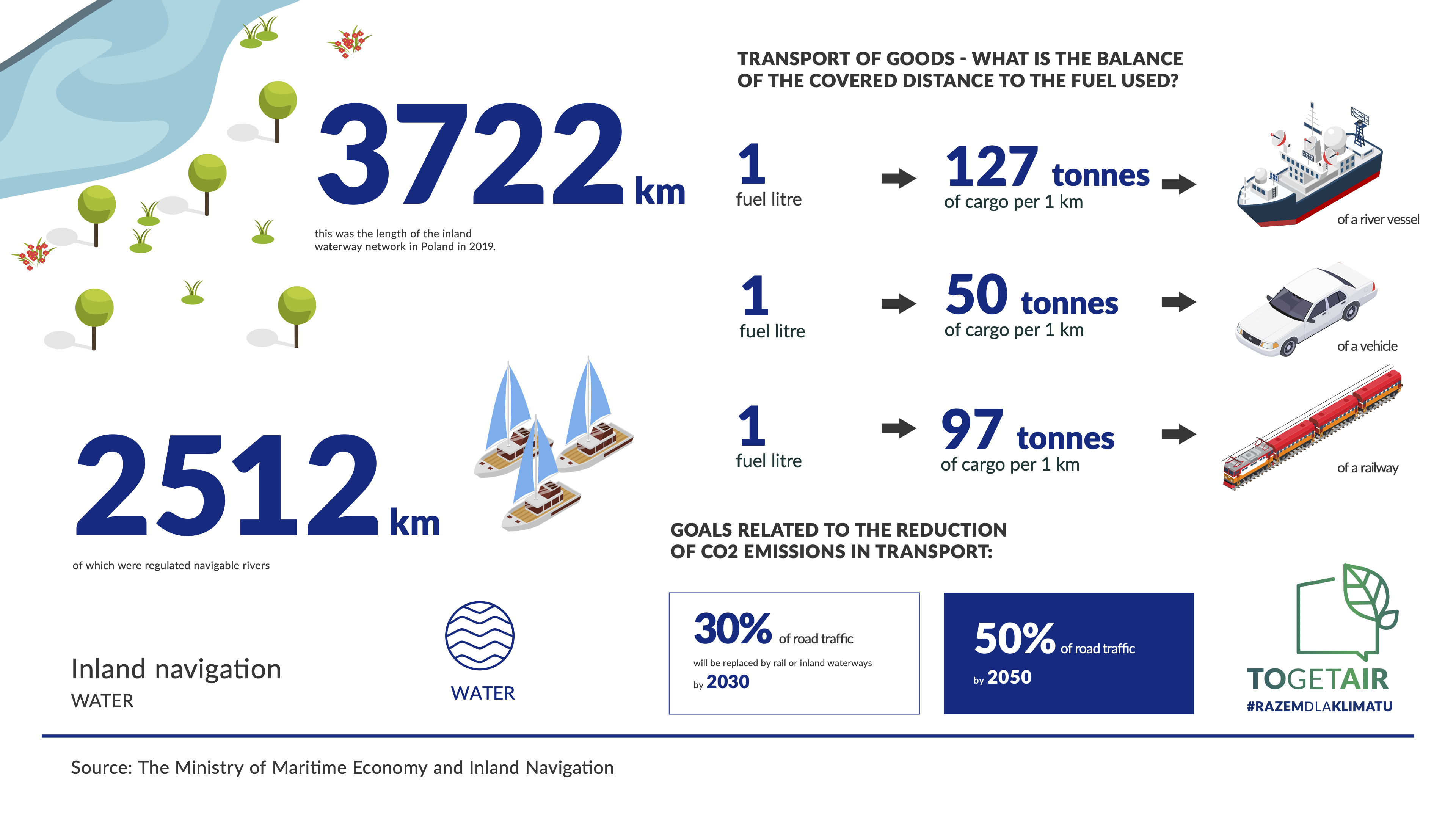 Inland waterway transport can take over some of the freight from road transport, contributing to climate neutrality goals by, among other things, reducing car traffic.

In 2016 the government adopted "Assumptions to the plans for development of inland waterways in Poland until 2020 with a perspective until 2030". Among the conditions necessary to restore inland waterway transport in Poland, the document mentions, among other things, the revitalisation of the Oder Waterway, the restoration of the navigability of the Vistula from Warsaw to Gdansk and the connection of the Oder, Noteć, Vistula and Bug rivers. Connecting, in cooperation with the southern neighbouring countries, the Oder, Elbe and Danube rivers have been identified as a priority.

The Ministry of Infrastructure is working on programmes for the development of inland waterways in Poland. The Odra Waterway Development Programme and the Vistula River Waterway Development Programme are under development. The first of these projects involves the construction of the approximately 90-km-long Silesian Canal, which would connect the Vistula with the Oder, running through the areas of Kuźnia Raciborska, Rybnik, Żory, Tychy and Bierun. This would allow the industrialised areas of Upper Silesia and western Małopolska to be connected to the Baltic Sea by water, as an alternative to road transport.

Efficient inland waterway transport will foster the development of seaports (Gdansk, Gdynia, Szczecin and Swinoujscie), which are of vital importance to the Polish economy and still have considerable potential to be exploited. The development of waterways will ensure better transport accessibility to seaports from the land.

An essential link in intermodal transport

Where only waterborne transport cannot be used, combined transport offers an opportunity to reduce environmental impact. The principle is to use inland waterway or sea transport (as well as rail transport) for distances above 100 km in the shortest route, with deliveries to the principal mode of transport and the final consumer using road transport.

The need to eliminate transport bottlenecks while building the missing links in the infrastructure creates a sustainable basis for the development of waterborne transport. The application of hydrological and ecological knowledge will enable programmes to be implemented in a way that is as environmentally friendly and contributes as little as possible to climate change. It is important to modernise the current fleet in terms of implementing low- or zero-emission propulsion in ships. The digitalisation of the sector can have a positive impact on reducing emissions, shipping safety and the environment through, among other things, efficient and effective management of vessel traffic and services.

1Based on the European Agreement on Main Inland Waterways of International Importance of Geneva of 19 January 1996.
2„Transport in the European Union, Current Trends and Issues” (2019)
3https://www.nik.gov.pl/aktualnosci/rozwoj-srodladowych-drog-wodnych.html