How do we heat our houses? - THE MAIN RESULTS OF THE STATISTICAL RESEARCH INVOLVING SINGLE-FAMILY HOUSES IN POLAND

Heating of residential buildings is the main source of air pollution in Poland. Burning coal and wood in boilers to heat residences is emitting excessive smog-causing pollution, especially old-type boilers, which are characterised by high emissions. On a national scale, the annual emission from this type of equipment is responsible for 52% of PM2.5 dust and 91% of carcinogenic benzo[a]pyrene. This means that the air in Poland will not improve, unless we get rid of this type of heating. The latest research carried out by the Polish Smog Alarm and the Institute of Environmental Economics  on a representative sample of 1,000 single-family houses shows that something is starting to change and the inhabitants of Poland, albeit slowly, are moving away from heating their homes with these kinds of smog-causing boilers.

The research was carried out in December 2020. The results can be compared with similar research carried out in 2013 by the Institute of Environmental Economics . Therefore, we can observe what has changed over the last seven years in terms of used heating sources or the energy efficiency of buildings.

One of the most important pieces of information provided by the research is the fact that fewer and fewer people living in Poland use coal to heat them (compared to 2014, the percentage of such households fell from 69% to 51%) and this is by far the biggest change when it comes to heating sources. However, it should be remembered that still more than half of the houses are heated with coal. At the same time, the number of gas-heated households increased from 14% to 24%. The percentage of houses heated with biomass also increased, from 14% to 19%. The comparison of the structure of heating sources in 2014 and 2020 is presented in the chart below. 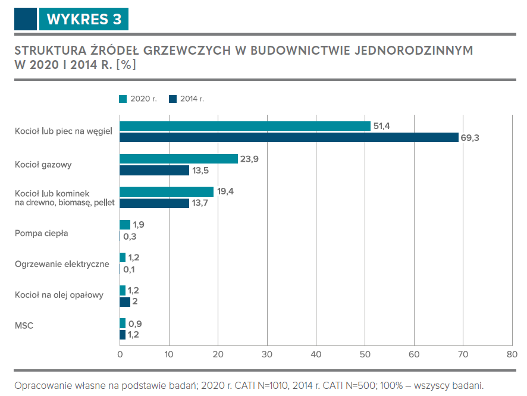 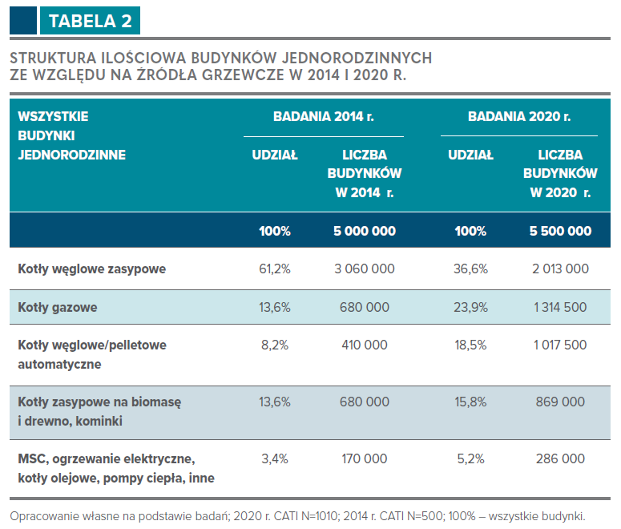 Manually-charged boilers are still the vast majority of coal and biomass boilers. Their share is around 75%. However, it should be noted that this trend is gradually changing in favour of automatic boilers. The research carried out in 2014 shows that their share was only 12%, increasing to 18% in 2017, and so should have reached almost 25% in 2020. The average age of a charging coal-fired boiler is almost 10 years. This is very  concerning due to the fact that this age of boiler are in the major polluters and should be decommissioned as soon as possible. The newest are biomass pellet boilers, almost 70% of them are less than 3 years old. 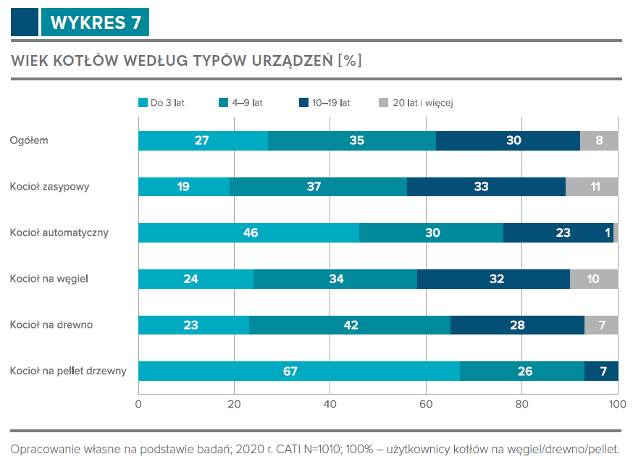 The obtained data regarding the type and age of heating devices were the basis to identify a group of devices that do not meet the requirements of anti-smog resolutions and as such qualify for replacement in the coming years – hereinafter called the ‘target group’. As many as 54% of single-family houses in Poland are heated with coal and wood boilers that emit too much pollution and do not meet the emission limits set out in anti-smog resolutions. This is almost 3 million boilers on a national scale, which should be replaced in the coming years. Most of these devices are found in older houses and in rural areas. 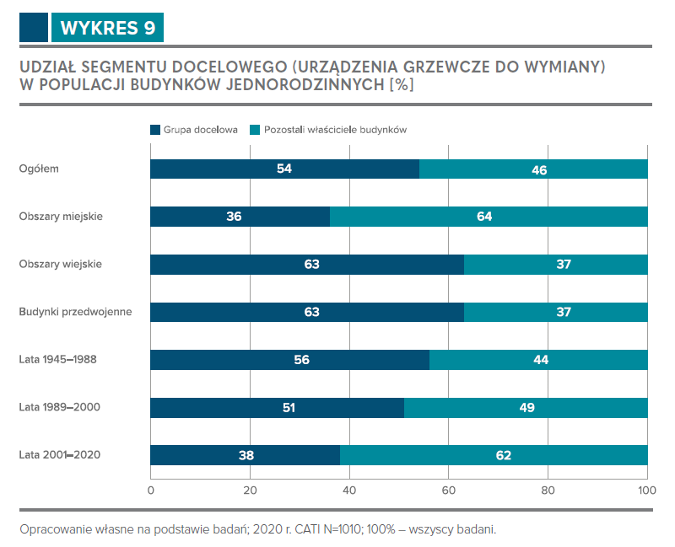 Plans for the modernisation of sources for solid fuels

Among the results in the field of modernisation of heating sources, the fact that almost half of the respondents whose houses are heated with boilers that do not meet the requirements of anti-smog resolutions do not have any plans to change the heating source is the most significant. This information should alarm central, regional and local authorities. An intensive information campaign regarding the requirements of anti-smog resolutions, and at the same time promoting the available subsidy programs, is needed to eliminate obsolete heat sources.

Gaseous fuel is the most frequently chosen among people who are planning such a change. Less than 9% of the respondents from the target group decided to replace the existing source with a modern coal-fired boiler (the vast majority of the respondents from this group indicate that these will be automatic boilers). A similar number of respondents chose pellet boilers. 5% of the respondents declared plans  to use heat pumps, and 3% intend to install electric heating, most of which is to be based on energy from planned photovoltaic installation. 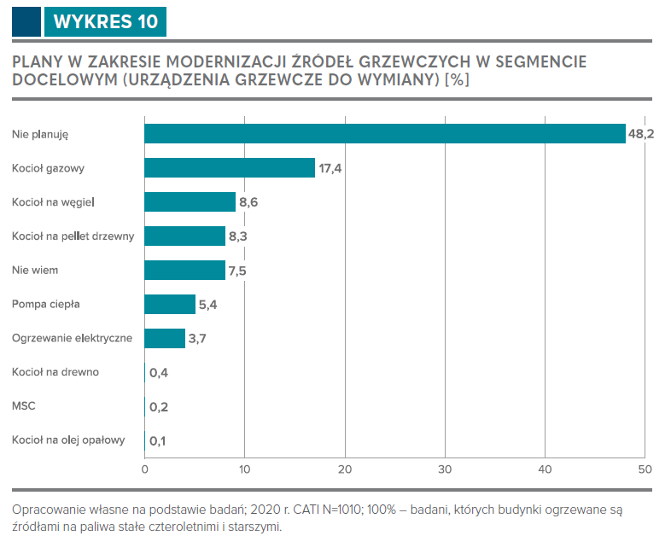 Slightly more than half of the respondents planning to modernise the source count on obtaining subsidies. One tenth of the people in this group indicates they will apply for a loan or credit. Positively, the replacement of heating source ranks first among the most urgent investments needed by building owners in the target group. 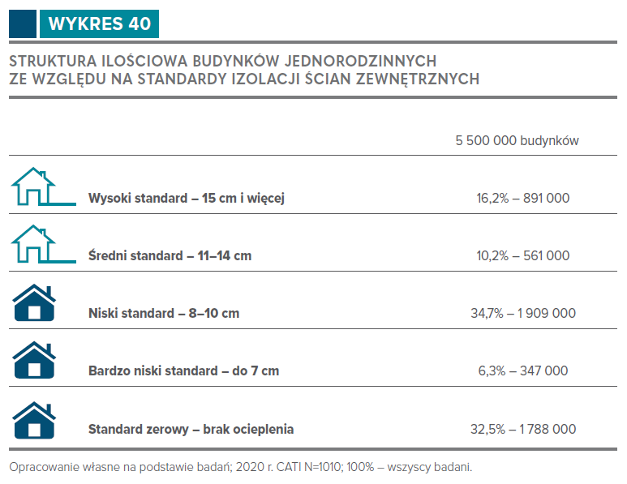 59% owners of the non-insulated buildings declare their willingness to implement investments in the thermal modernisation of their building for the coming years. Slightly over 40% of respondents, who plan to insulate walls, count on obtaining a subsidy. 16% of people in this group indicate that they will use a loan or credit. The average expected cost of an investment in thermal insulation of a house is PLN 24 thousand.

The anti-smog resolutions, which prohibit the use of substandard solid fuel boilers, are in force in almost all of Poland, except for: Opole, Podlasie and Warmian-Masurian voivodeships. The resolutions provide for a transitional period for adapting to these regulations. Depending on the voivodeship, these resolutions will be passed between 2021-2024 for below standard boilers, and for class 3 and 4 boilers in 2027-2028. After these dates, only eco-design (class 5 installations) or heating sources not based on solid fuels can be operated. As already mentioned above, the percentage of single-family houses that do not meet the requirements of anti-smog resolutions is as much as 54%, i.e. almost 3 million buildings. 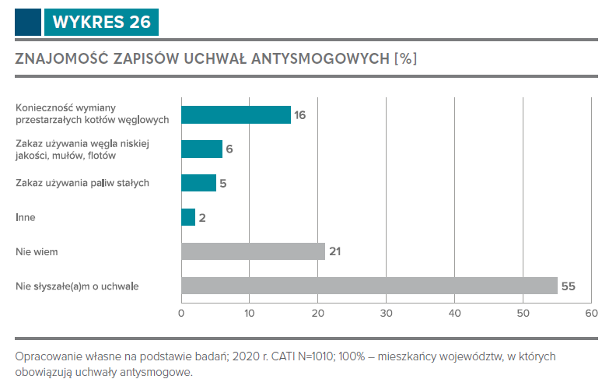 The actual level of knowledge about the provisions of anti-smog resolutions can be shown by the level of knowledge of the date for the replacement of boilers provided in them. With regard to this, the research results leave no doubt that the level of knowledge of anti-smog resolutions is very low. Only 14% respondents from those voivodeships where the resolutions are in force are able to provide the correct date which is the final date for the replacement of boilers (the correct answers also include dates earlier than the final date specified in the resolution). These results clearly inform the authorities of all levels – central, regional and local, that efforts should be significantly intensified in the field of informing citizens about the provisions regarding the ban on the use of boilers that do not meet the requirements of anti-smog resolutions.

One in four owners of a single-family building included in the research has not heard about the availability of support programs for the replacement of heating sources and other thermomodernisation investments. Almost half of the respondents indicate that they know that such programs are available, but do not know their names and, as a rule, do not know the details. The government "Clean Air" program is the most frequently mentioned of all the support programs. At the same time, according to the surveyed awareness of the respondents, the availability of grant funding relief for thermomodernisation is very low – unprompted, it is indicated by just 0.8% respondents. 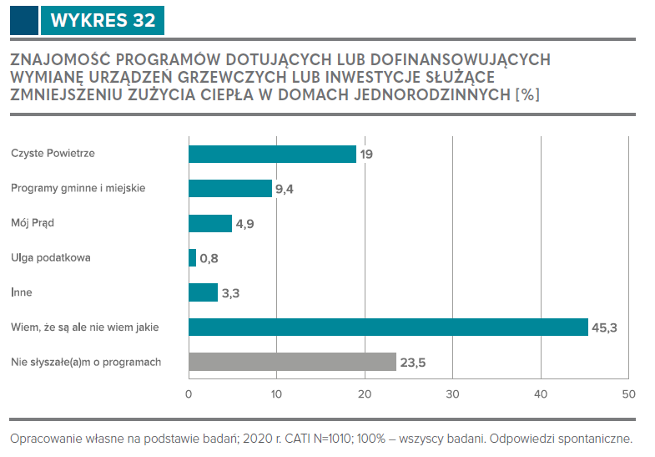 37% respondents declared their willingness to use support programs in the future. Almost half of the respondents perceive "Clean Air" as an attractive program for owners of single-family houses. Only one-fifth of respondents disagreed with this. On the other hand, almost half of the respondents believe that participation in the program and obtaining funds would require a lot of effort from them. Only one-fourth of respondents expressed the opposite opinion. Therefore, it seems that despite the reform of May 2020, the Clean Air program is still perceived as complicated.

In the context of the ongoing discussion in Poland about a complete ban on heating houses with coal, including eco-design or class 5 boilers, it should be mentioned that most respondents believe that coal-fired boilers should not be installed in new buildings. 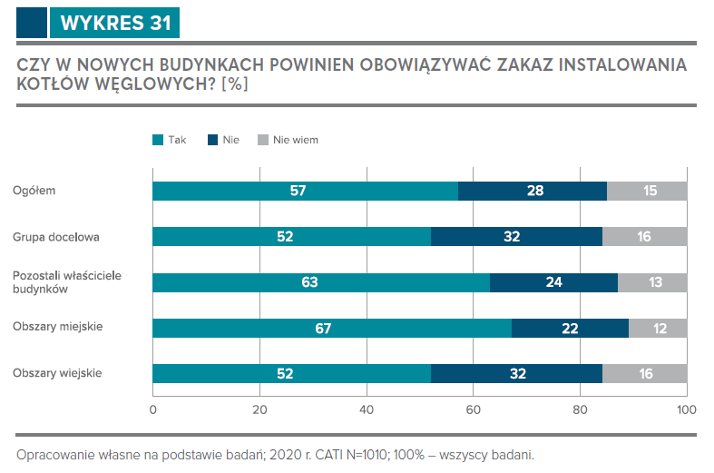 The research was carried out by the CEM Market and Public Opinion Research Institute in November 2020. The CATI telephone interview technique was used, based on a standardised interview questionnaire. The research was carried out on a random sample of 1010 owners of single-family houses throughout Poland. The sample selection was controlled according to the structure and the location of buildings in rural or urban areas. Only persons who had influence in the household on investment decisions related to the technical condition of the building participated in the research. The realised sample with the number of 1010 interviews, with the assumed level of 95% confidence, results in an estimation error in the range of +/- 3%.

The development of heating networks in less urbanized areas is necessary for air and climate quality
A thorough understanding of smog is the way to effective action!