Without the essential changes in the transport sector, we won't manage to achieve the EU goals in matters of climate neutrality in 2050. Both as Poland and as the EU we must as fast as possible take action to speed up the pollution reduction (especially greenhouse gases) from road transport.

The goal defining the policy of the European Union (including Poland) in the upcoming years is the obtaining of climate neutrality till 2050. The path to neutrality on the strategic level is described in the Communication of the Commission „The European Green Deal” COM(2019) 640 z 11.12.2019 r.1. According to it the most important task for the Commission is solving the problems connected to the climate and the environment through „the new strategy in favor of growth, whose goal is the transformation of the EU into a just and prosperous society living in a modern, resources saving and competitive economy, which in 2050 will achieve the zero net level of the greenhouse gas emissions and within which the economic growth will be separated from using natural resources”. Therefore the above means the necessity of the reduction during this time of 90% of the greenhouse gas emissions which come from transportation.

These are very ambitious goals. The crucial question remains – how can we achieve them?

The changes on the EU level will have to include all the types of transport (marine, inland, air, rail, and road). However, from the point of view of the efficacy of the planned changes, it is worth focusing in the first place on this last one, which is responsible for 72% of emissions (data from 2016 – nowadays it is estimated that it can be even higher level). 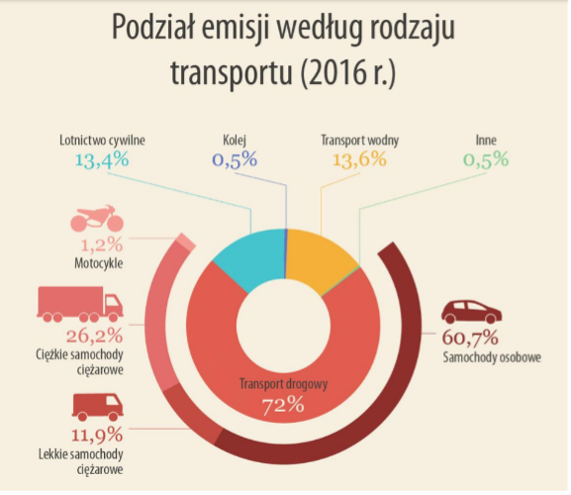 We observe similar dependencies in the domestic transport sector.

Source: own data of KOBIZE.

Poland, as also other member states have only 29 years for preparation and implementation of the essential changes in her transport sectors.

For many years we have observed the gradual movement away from fossil fuels (among others oil and diesel fuel) in transportation in favor of alternative fuels (the decarbonization of transportation). It lies first of all in introducing the regulations which discourage users of cars (especially passengers ones) from using and buying their nonecological versions (diesel, gasoline) in favor of zero-emission cars (electric, hydrogen).

How can we support the decarbonization in Polish road transport? There are many instruments, we can divide them into fiscal ones (connected among others with the purchase of a car and its usage/ownership) and nonfiscal ones (soft ones). It is worth pointing out that the mentioned instruments can influence both in a positive way on the choices of car owners (decision of purchase of an electric car) and in a negative way (decision of giving up the purchase of a car with diesel or gasoline drive). We call the combination of such instruments the system bonus/malus which is the system of penalties and rewards.

Among the most often used fiscal instruments connected with the purchase of a car are:

The fiscal instruments connected with owning a car:

The catalog of the instruments is wide – the question is if it is enough for the realization of the climate neutrality goal in 2050?

The majority of commentators are consentaneous that it is not. The missing element is the question of the decarbonization of the power supply of the zero-emission cars. For example even if till 2050 all the cars in Poland (around 30 million, including around 23 passenger cars) were electric or hydrogen, still it would be important from what we acquire electricity and hydrogen which supply their power. Thus to achieve the reduction goals in the Polish transport sector, additional actions in other sectors are necessary, first of all in energy production and the considerable increase of the share of renewables (powering electric cars) and obtaining the „green hydrogen”. Thus the revolution in transportation in the context of achieving climate neutrality requires also the revolution in the energy sector.