Rail travel is the “most energy-efficient, cost-efficient and environmentally-friendly transport service”1, an opinion shared by most experts, and global trends  as well as  political decisions (e.g. USD 2 trillion American Jobs Plan, from which USD 80 billion is to be allotted to an American rail carrier2) are an additional confirmation of that. The world is moving towards rail transport and rail itself meets the expectations, improving and investing in infrastructure (punctuality), rolling stock (comfort) and renewable energy sources (ecology). Yes, railway, like other means of transport, must change its power source, i.e. the fuel providing electricity to Polish trains.

One might ask: how come? Indeed, the vast majority of locomotives no longer have smoke-puffing funnels, since more than 90% of passenger and freight services are carried out with the use of electric traction.3 That is true and is the great railway advantage over road or air transport. Rail does not emit CO2 or other harmful chemical substances directly into the atmosphere. It is “powered by electricity”, i.e. almost entirely electro-mobile – which the automotive industry is laboriously striving to achieve. At the same time, cars and buses unduly usurped the term “electromobility”, forgetting that trains and trams have been entitled to this title for a long time.

Turning back to power sources, this case does not seem so “clean” anymore. The Polish rail is supplied with energy available in the power system, i.e. 88% coal4. So when we take the train, we still leave a carbon footprint behind – much smaller than if we were driving a car and not comparable to flying a plane, but nevertheless.  Can this be changed? In many countries it is successful. Some people are certainly familiar with (and admire) solutions implemented by the Dutch (since 2018 wind energy has powered 100% of Dutch trains) or Germans (currently 61,4%, the goal is 80% green energy by 2030).

It is also possible and realistic in Poland. What more, the industry itself has already done much in this direction, and together we have developed a clear-cut solution – the Green Railway model. The carriers and railway companies associated with the Railway Energy Efficiency Center, responsible for 95% of energy consumption of railway, developed a programme which enables the railway switching to the RES power in 85% – as soon as by 2030. Thus, Poland has a unique opportunity to become a leader in green transport by fulfilling, or even exceeding, the guidelines of both the European Union and national policies in this area.

However, the unity of our industry alone is not enough to implement the Green Rail programme. We – the carriers, the infrastructure managers and the experts – have made an effort. We have jointly developed the Green Rail programme – fully implementable and realistic, providing additional benefits at many levels. However, as with the “My current” programme or the electric car subsidies, systemic support is needed. We are talking about climate policy, in which rail should play a significant role, about actions at the level of local governments, which should demand clean rail transport for their residents, or finally about the pressure of passengers, who will demand a truly “green ticket” for rail. If we all understand that Green Rail is the shortest path to achieving climate goals, organizations and companies start to truly account for transportation's carbon footprint, and state administration introduces incentives and support instruments for long-term relationships between carriers and energy providers, the Green Rail will become a reality. Our commuting and inter-city travel and freight transportation will leave almost no carbon footprint.  The Green Railway will be an ecological showcase for Poland and an element of its soft power supporting Polish arguments in talks on, among others, the New Green Deal with European partners.

How to move from words to deeds?

Step one – maturity and unity of the industry

It all started in March 2019, when we established the Centrum Efektywności Energetycznej Kolei (Railway Energy Efficiency Center), or CEEK for short.5 In the beginning, we focused on energy conservation. During the first year, together we worked out energy-efficient and concurrently,, pro-environmental solutions that serve all participants of the railroad market, and ultimately – mainly passengers. We focused on three initiatives:

These three initiatives made up CEEK's original goal. We have calculated that we can reduce electricity consumption by 1.2 TWh in 10 years. This will reduce CO2 emissions by over 1,000,000 tons! 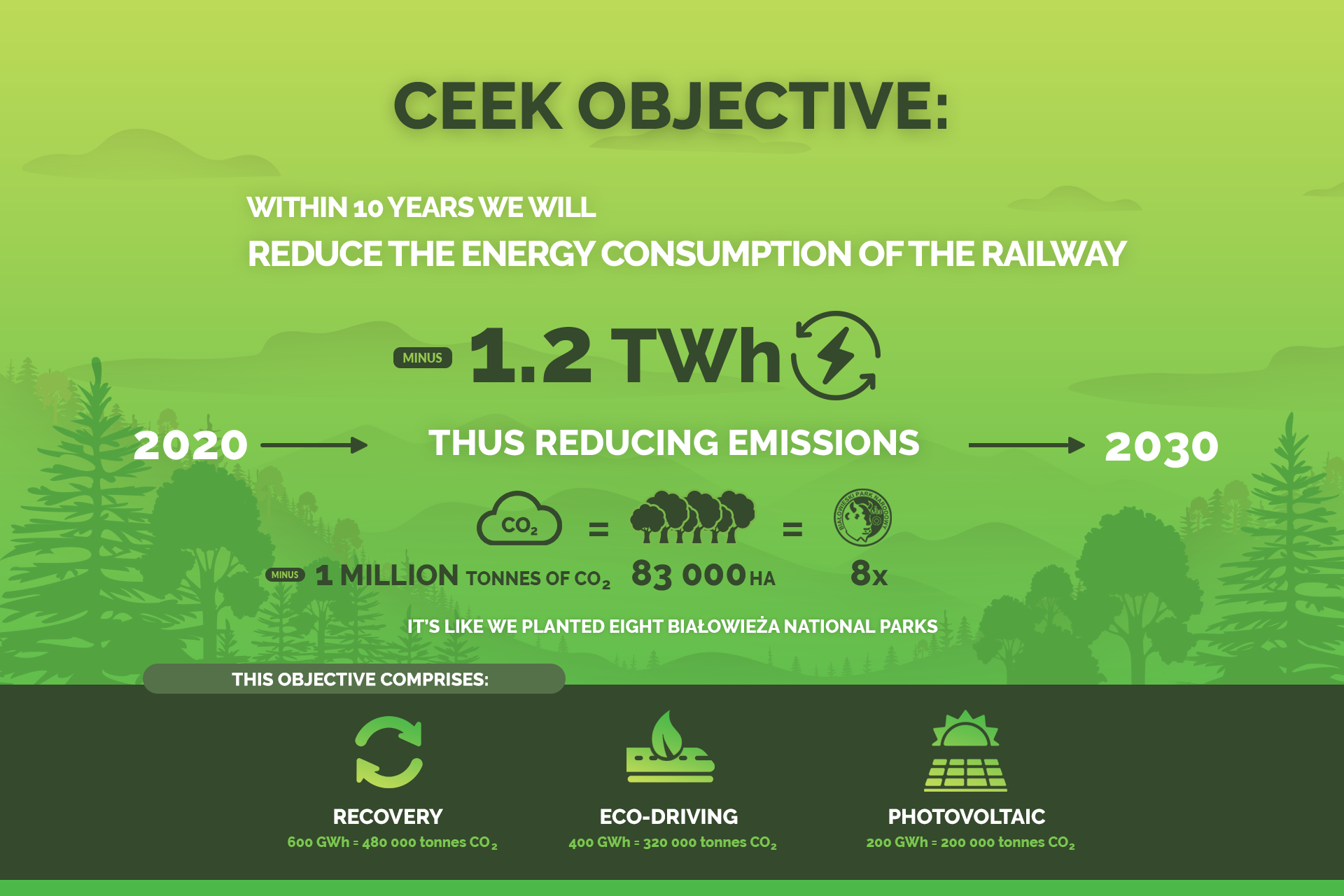 As we've worked on energy efficiency, especially the RES initiative, we've realized that saving energy is an important, but not the most important, part of making rail more competitive. If we want to be a truly green means of transport, we need to ensure that the energy flowing through the catenary is produced from environmentally friendly, non-emitting sources. This is how the postulate of a green railroad emerged, which after only a few months was operationalized in the Green Rail programme.

The Green Rail programme assumes the rail switch to green energy in 85% by 2030. This means reducing CO2 emissions by 8 million tons (equivalent to the volume of 4,000 National Stadiums). 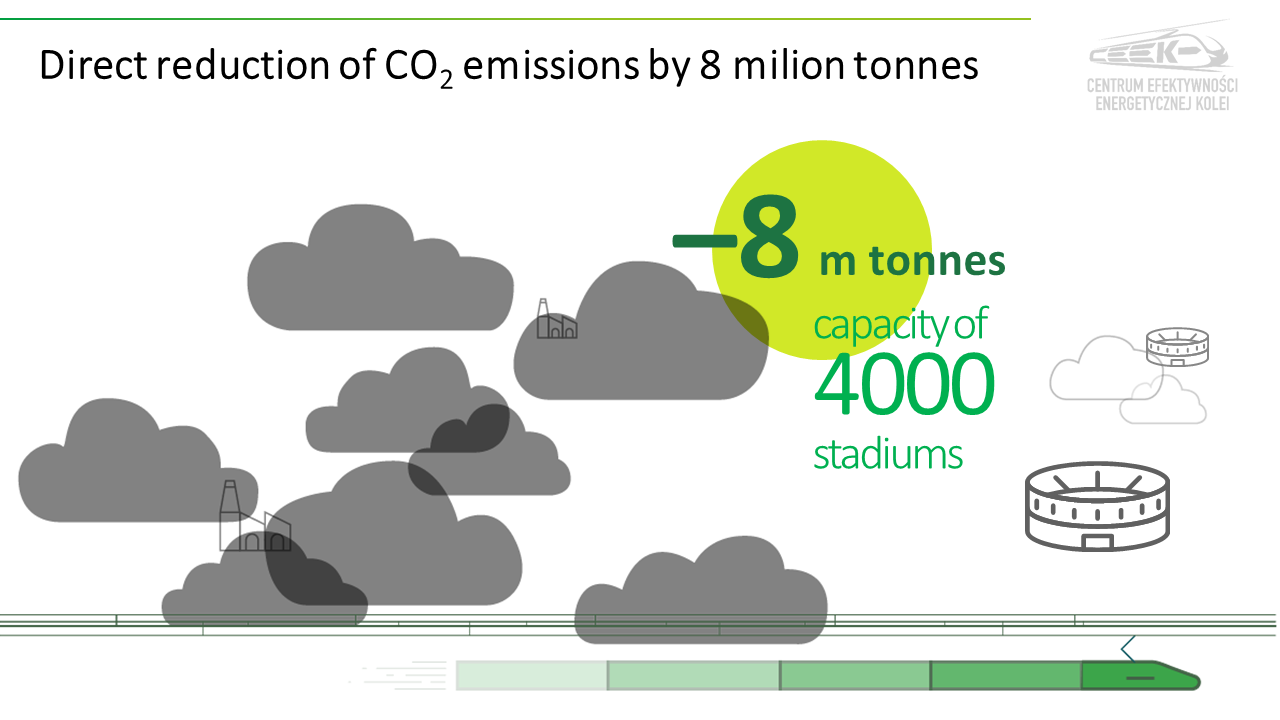 This is a programme to create 1.8 GW of green, smart "power plant" dedicated to rail.

Of course, it will not be a single site, but many dispersed sources located along railroad lines throughout Poland. Photovoltaic farms, wind farms, and in the future probably also hydrogen stations, which will power trains in places where it will be impossible to electrify railroad tracks. The possibility to connect RES farms to the railroad system will be a basic incentive for small and medium enterprises, which, having a guarantee of receiving clean energy for about 8 years, will be able to invest in its production. Rail carriers, in turn, will have a guarantee of green energy supply for their current and future needs. The whole Programme will be coordinated at the level of the railroad power grid manager who will connect and balance the emerging RES sources with differentiated demand resulting, among others, from the timetable and tonnage of trains passing through a given line. It is worth mentioning that PKP Energetyka (the owner of the railroad power grid) already has an Intelligent Integrated Railway Power Distribution Management System which, through IT systems as well as sensors and big data systems, enables effective and safe management of this complex environment of dispersed power sources and the demanding system of drawing from unevenly moving trains. 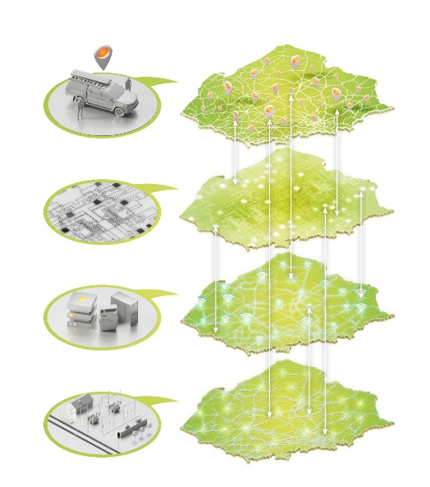 Economically, the programme will help stimulate investments of up to PLN 10 billion.

Why are we going to succeed? There are many reasons, but three seem to be the most relevant:

The Green Rail Programme has entered the implementation phase. At the moment, two companies are already on board: DB Cargo7  and CTL Logistics. Further carriers are preparing to join the Programme. This is the result of the last two years, during which the rail industry associated in CEEK has conducted massive-scale internal work – self-organizing, working on three efficiency initiatives and creating an effective solution for making rail transport greener in Poland. The Green Railway Programme has ambitious goals which will help to achieve the targets resulting from the Polish Energy Policy (36% RES in 2030) and EU ambitions (EU climate neutrality in 2050).

Green Railway will serve the state, climate, economy, passengers, and will accelerate the technological development of railroads. But it also needs support, because without support, it will be very difficult to make such an ambitious plan come into being in such a short time.

We would like to remind you of our seven postulates:

Join us on this journey, where our ticket will become ever greener!

1 Source: „Fajny kraj do życia” (A nice country to live in), an interview with prof. Marcin Popkiewicz, p. 284, or: https://krytykapolityczna.pl/kraj/michal-sutowski-marcin-popkiewicz-polska-kryzys-klimatyczny-wywiad/
2 Source: https://www.rynek-kolejowy.pl/wiadomosci/usa-80-mld-usd-dla-amtraka-biden-stawia-na-kolej-101779.html
3 Source: Urząd Transportu Kolejowego (Office of Rail Transportation)
4 Share of conventional sources calculated on the basis of the structure of fuels and other primary energy carriers used to generate electricity sold by PKP Energetyka in 2019.5 Więcej informacji na temat CEEK na stronie: www.ceek.pl
5 For more information about CEEK, visit: www.ceek.pl
6 2nd European Investment Bank (EIB) Survey conducted in cooperation with BVA company: https://www.money.pl/gielda/ebi-73-polakow-chce-korzystac-z-transportu-publicznego-w-zw-ze-zmiana-klimatu-6467533961078401a.html
7 Report on the accession to the Programme on the website: https://www.rynek-kolejowy.pl/mobile/zaproszenie-pkp-energetyka-i-db-cargo-podpisza-list-intencyjny-100953.html

On the way to climate neutrality – the electromobility as a tool of the mitigation of the climate change
Electromobility: an opportunity for the Polish economy