The growing prices of electric energy and carbon dioxide emission costs, along with stricter EU regulations, create an impulse for the realisation of green investments. Photovoltaics became the fastest growing branch of the electric power generation sector in Poland. This resulted, among others, from the programmes Energia Plus (Energy Plus) and Mój Prąd (My Power), subsidies from regional operational programmes and the thermal modernisation allowance.

Solar panels are increasingly often noticeable not only on residential houses, but also on service and public utility buildings. Photovoltaics is enjoying a large popularity both among customers from individual households, and entrepreneurs. The year 2020 saw record results in solar power generation, and the upcoming years will most likely continue this trend in the Renewable Energy Sources (RES) segment.

Decreasing installation costs drive the growth of the sector

The high costs of power generation from traditional sources (caused by the need to acquire the rights to CO2 emission) have become a factor that fosters making decisions on investing in renewable energy sources. In the last 10 years, the Levelized Cost of Electricity (LCOE), which includes the construction, operation, and maintenance of a power plant during a period specified for the given technology, decreased for photovoltaics by 90%[1]. As a result of the decrease in the prices of photovoltaic modules and their improved efficiency, the price per unit of power generated from this source may be lower than the price of electricity on the wholesale market.

Levelized Cost of Electricity (LCOE) according to technology 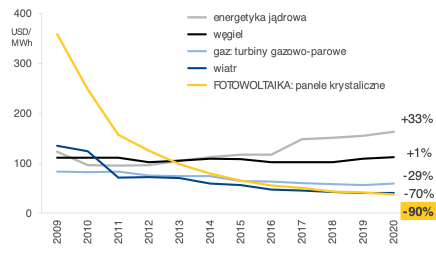 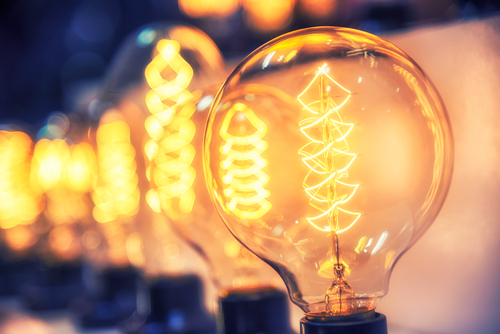 The availability of funding increases with the growing market

The possibilities to finance investments in RES for both entrepreneurs and consumers have been increasing in recent years.

Photovoltaic systems may currently be financed from a loan or leasing. Additionally, the development of the market has been supported by government programmes, such as Mój Prąd (My Power), Czyste Powietrze (Clean Air), or Energia Plus (Energy Plus) that offer subsidies for the financing of investments.  Various possibilities of external financing, combined with the government subsidies programme, foster in particular the financing of systems installed for personal use.

The element that supports the use of such solutions by companies and households is the decision to provide equal prosumer’s rights to consumers and entrepreneurs. As a result, both natural persons and companies may produce electric power from solar panels for their own use and transfer the surplus power to the power distribution network. 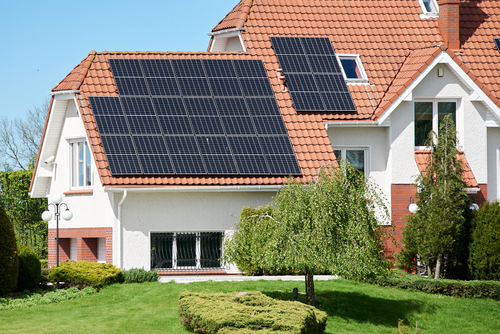 Until now, natural persons could benefit from two programmes: Mój Prąd (My Power) and Czyste Powietrze (Clean Air) for personal use. Currently, the first of these programmes that offered non-refundable subsidies for the installation of systems in the amount of PLN 5 thousand, has been suspended. However, consumers may still apply for financing under the Czyste Powietrze (Clean Air) programme. The programme offers subsidies, but only for those who replace an old, inefficient heating source, whose technical specifications are provided in the programme.  Additionally, consumers may combine subsidies with commercial products. An example of such combination may be the offer of Ekopożyczka (Eco-Loan) offered by PKO Bank Polski. The product includes financing of both the purchase and the installation of solar panels, up to the amount of PLN 50 thousand. Entrepreneurs may also use government subsidies.  Especially for them the programme Energia Plus (Energy Plus) was created. Under the programme, they may receive a non-refundable subsidy up to 50% of the investment or a low-interest loan up to PLN 300 million.

The development of government programmes also influences the growth of the offer of commercial financial institutions. Apart from the loans available on the market, recently entrepreneurs may also finance such investments by leasing. This product is usually offered in a simplified procedure, and companies gain the possibility to finance photovoltaic panels along with their installation.

The loan or leasing allows entrepreneurs to finance the whole project even up to the amount of PLN 500 thousand. In most leasing companies, the leasing period is planned for six years.

In the opinion of experts from PKO Leasing, the return on investment for industrial installations takes approximately six to ten years. With the proper calculation, appropriately adjusted leasing instalments may replace the costs of electric power purchase. This aspect, i.e. lowering the costs, is essential in the context of growing prices of power that affect both households and entrepreneurs.

Comparison of loan and leasing for investments in photovoltaic systems

The Polish power generating system is based on coal

In Poland, 68% of the generated electric energy is produced from coal, which results in high emissions of greenhouse gases. The emissions from power generation in Poland have been decreasing in recent years, but they are still the highest in the EU (in 2020 the carbon dioxide emission per Kilowatt hour was, on the average, 724 g, which is three times higher than the European average of 226 g)[3] . Renewable energy sources account for 22% of the generated power, including 1.25% from photovoltaics[4].

As a result of such production structure, the wholesale prices of electric energy in Poland are the highest in the EU. In the light of a permanent trend of increasing prices of CO2 emission rights and EU intensifying its actions for the climate, the fact that national energy production is based on fossil fuels will most likely lead to increased import of energy from neighbouring countries and growing prices. According to the Central Statistical Office, in 2020 the electricity bills of households increased by 11.7% year to year. 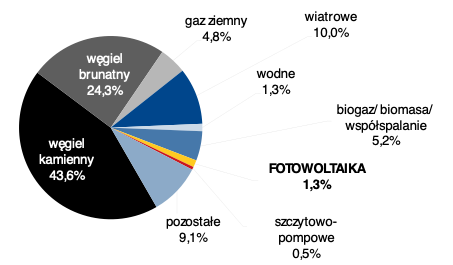 Photovoltaics has become the natural escape to avoid the inevitable increase in electricity prices. The prospects of future savings on the purchase of power has convinced thousands of Polish citizens, who became more and more interested in installing solar panels on their roofs. The Mój Prąd (My Power) programme additionally reinforced this tendency and improved the cost-efficiency of this type of installations. In 2020, the number of prosumers grew by approx.  297 thousand to reach more than 457 thousand. 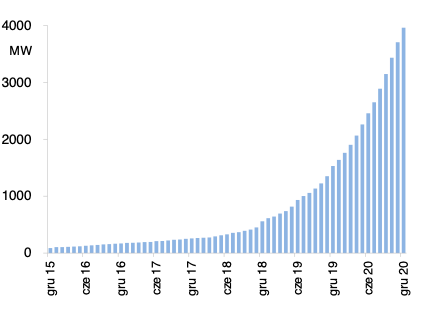 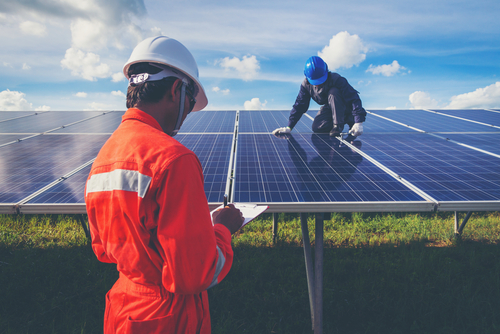 At the end of 2020, the installed capacity in photovoltaics reached nearly 4 GW compared to 1.5 GW at the end of 2019 (+159% y/y). Poland is the fourth largest photovoltaic market in the European Union in terms of the increase of installed capacity, after Germany, the Netherlands, and Spain . The solar power generation nearly tripled in comparison to the year 2019 (1972.2 GWh compared to 715.3 GWh).

Value of the photovoltaic micro-systems market

In 2020, an increase in the share of small, medium and large systems was noted in the structure of the installed capacity of all PV systems. However, micro-systems have a dominant share (approx.  78%) . According to the Polish Photovoltaic Association Polska PV, in mid-2020 the value of the Polish micro-systems market amounted to approx.   PLN 6 billion, while the value of the market of small, medium, and large systems was approx.  PLN 1.3 billion. 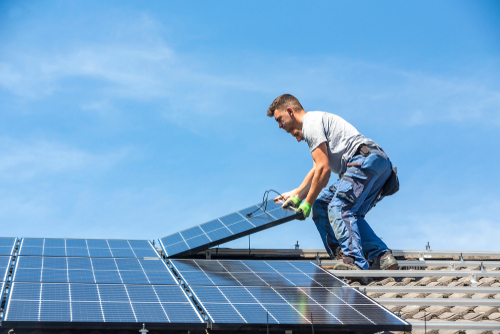 Value of the photovoltaic systems market 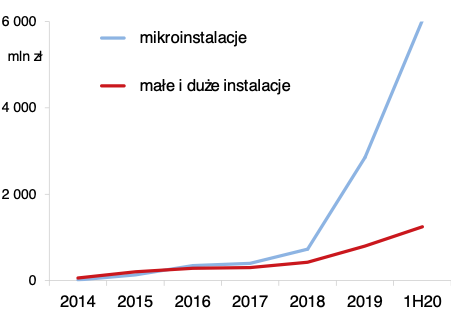 According to estimations, at the end of 2020 the total value of investments in photovoltaics in Poland was approx.  PLN 10 billion, of which households invested about 6.5 billion, and entrepreneurs and local self-governments approx.  3 billion[7].

In the next few years, the market should maintain this growing tendency and the proportion between industrial power plants and prosumers should become more balanced. On 2021, the pace of installing micro-systems will slow down, as the subsidies programme Mój Prąd (My Power) has expired, and the announced next fund will support, apart from photovoltaics, also chargers for electric vehicles and energy storage facilities.

The development of PV farms is supported by the auction system 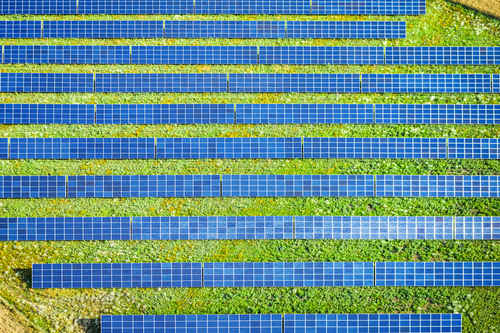 In Poland, the share of installations built as part of RES auctions reaches 22% of the capacity. Auctions are considered to be a stable and predictable support system. Winning a RES auction increases the possibilities to obtain financing and ensures specific revenues for 15 years of operating the farm. As a result of the auctions that took place in 2020, a total of over 1.56 GW photovoltaic systems may be installed. On the other hand, the auctions planned for 2021 may result in the construction of new solar power plants of a total capacity of 1.8 GW. The European Commission agreed to prolong the functioning of the auction-based support system for producers of energy from renewable sources by 6 months, until the end of 2021. The investment boom in the photovoltaic farm segment will emerge at the turn of 2021 and 2022, as the projects from RES auctions will be put into use. Following the turn towards large photovoltaic farms, the market will gradually transform from prosumer-dominated to become more balanced.

The Member States of the European Union are obliged to ensure a specific share of energy from renewable sources in the final gross energy consumption, which is defined as the energy consumption in power generation, heating and cooling industries and transport.

The aim to become climate neutral in 2050 forces the EU to enter a much more ambitious path to fulfil the main goals. As a result of the European climate policy, the draft of the Polish Energy Policy to 2040 (PEP2040) had to be modified. Pursuant to the resolution adopted by the government on February 2, 2021, 1/3 of the total energy generated in Poland should be produced from renewable sources, including photovoltaics.

Dedicated European funds and policies being part of the European New Green Deal Strategy will support us in achieving in 2030 the installed capacity of 5-7 GW and 10-16 GW in 2040.

Installed capacity in RES by 2040 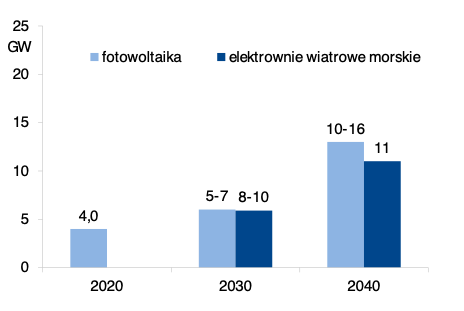