The fever. Alarm in the Lower Silesian forests.

There had been no solid precipitation for a few years, and springs and summers have been hotter than average. Parched by the sun, weakened by lack of water, the trees easily fall prey to a whole plethora of pests.

The curve of precipitation in Wrocław does not lie - the last three years were a lot below the average minimum. This can be considered representative of the region. Although holidaymakers always enjoy sunny weather, people working with nature - foresters and farmers - certainly don't. For them, the pinnacle of torment was the heatwave of spring and summer 2018.

Up until then, a reference point for a catastrophe in forests was the year 2015. That year, due to prolonged water deficit, an accelerated withering of pines in mountain and hill forests in the south and southwest region has been reported.  In many of those regions, the rainfall in the vegetative period (from the beginning of April to the end of September,) was half the yearly average. In the Milicke Bayou Preserve, usually “standing in water”, the average summer flow of the river Barycz was barely 10% of a decade average, and in August was six times lower than the intact flow. In the same year, in the Silesian Lowland and the Sudeten, the rainfall was half the yearly average. 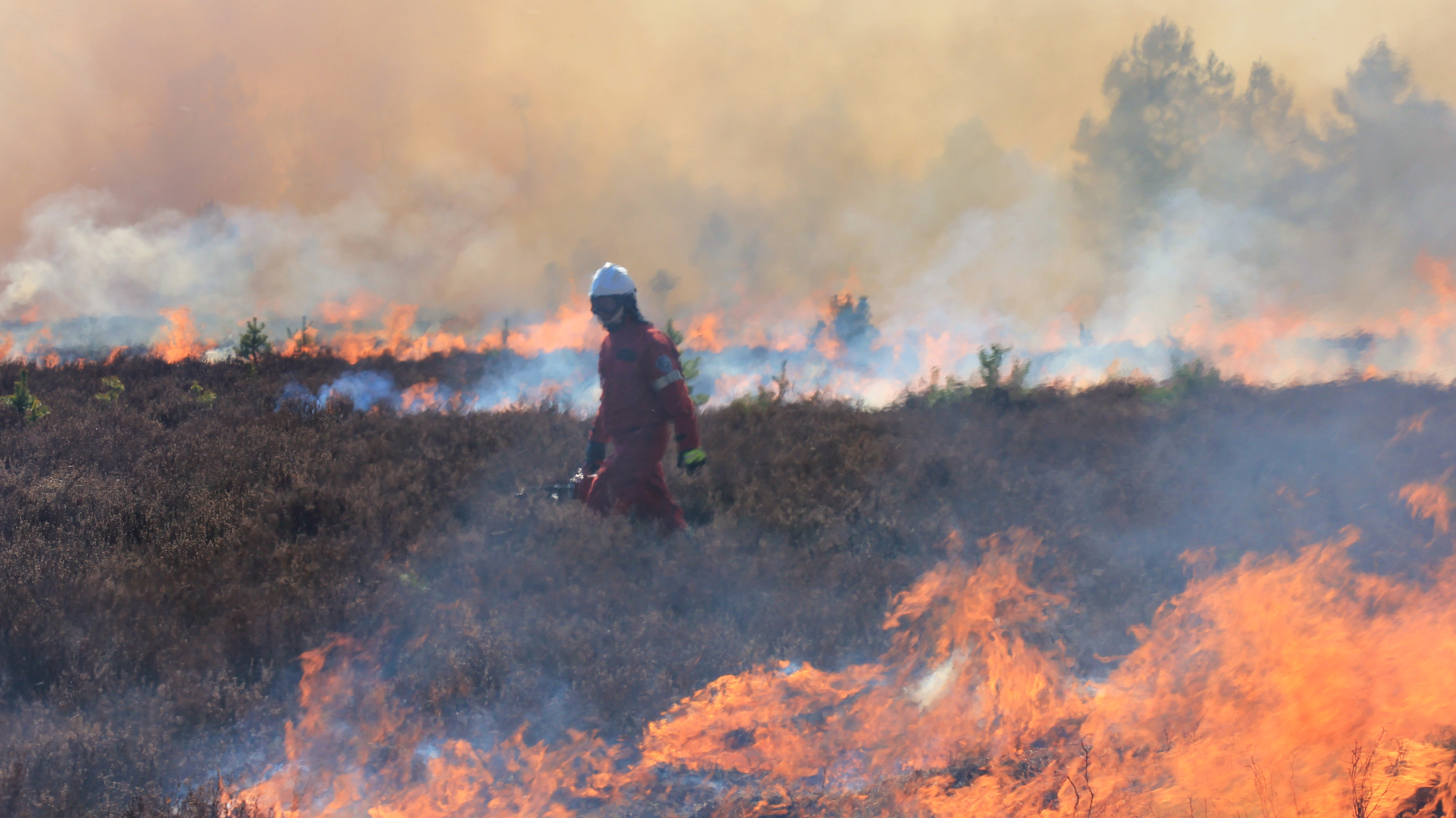 Record heatwaves were linked to just a symbolic daily amplitude – the nights were not bringing respite. Foresters started signaling the pines dropping older needles, the coronas getting red, and finally trees withering away. Secondary pests, in particular spruce spark beetle, came into prominence.

Jarosław Góral, from Wrocław Forest Protection Team, says that the year 2017, while wet, only slightly improved the situation of the forest stand. 2018 was “the final straw”. While 2015 was the impulse for disaster, these phenomena intensified significantly in 2018.

Together with Wojciech Mazur from Forest Protection in Wrocław, we are analyzing Poland’s maps of Climatic Water Balance. The CWB index describes the moisture level in the environment. The difference between incoming water (precipitation) and the loss in evaporation (evatranspiration.)

The whole of Poland was subject to a spring heatwave in the early phase of the vegetative season. In our region, average daily temperatures in April reached even 25 degrees C. During this period, it did not rain a single time – thought this is the time when vegetation needs a solid inflow of water to start growing. From July 20 to September 20 we could be talking about a disaster, and September itself was the hottest month ever recorded in Wrocław.

Another worrying aspect is that precipitation visibly changes its character – more and more often it takes the form of local tempests, rather than prolonged, wide-ranging rainfalls. Also, the water deficit we have means hydrological drought. A few rainy years would be needed to improve the situation significantly. Paradoxically, the disastrous “Flood of the century” of 1997 helped redress the severe water deficit we had before.

The leading actor of the drama happening in State Forests near Wrocław is the spruce, a boreal species of the cold temperate climate. This definition explains why the latest climate changes do not serve it at all. And it should be noted that it has the highest share in the region's tree stand – 25% of the surface and 32% of lumber capacity. No other region has such a high percentage, and the average is just 5%.

Nature provided spruce with a rather shallow root system, so it can’t reach too deep for water. To make matters worse, the tree can’t close its needles, as pine can. This means it cannot effectively control the moisture level of its cells and tissues (the so-called turgor). But the trial and tribulations of our hero do not end here.

As a species that grows quickly, it has found itself on many foreign soils, all over Central Europe, planted by forest owners blinded by profit. Therefore its percentage in the forests of Lower Silesia is too high. Artificially planted spruce turned out not to be resistant to civilization threats and climate change. Also, many of these tree stands have been kept standing until old age – mainly as tourist attractions. Its natural enemies find it easier to attack. Old spruce suffer from heat and lack of water, become ill and weakened – and are quickly attacked by mushrooms – armillaria or heterobasidion.

A whole family of spruce spark beetles follows. The still-green tree looks healthy but starts to lose needles, and in its lower parts, sawdust from spark beetle appears.   Pityogenes chalcographus is more difficult to spot since sawdust from the corona is efficiently dispersed by the wind.

The pine is not doing any better

Statistically speaking, 45% of the Wrocław Region forests area and 41% lumber mass give pine the top spot. Though spruce overrepresentation and its economic consequences (which will be analyzed later) focus our attention, pine's situation does not seem to be any better.

Persistent drought also takes its toll on pines. Fungal pathogens are quick to attack them. A weakened coniferous forest, be it spruce, pine or larch is plagued by root disease, especially fungus-based rot, and root polypore. But, for instance, Shhaeopsis sapinea causes the withering of its top sprigs.

This fungus became very active in 2016. We are very cautious as to the effects of Shhaeopsis sapinea this year. Secondary pests will be a huge threat. We observe a quick rise in their numbers. They weaken the trees, worsen their sanitary status, and finally destroy the coniferous forest. They form a dangerous team – spruce beetle, Pityogenes chalcographus, and Pissodes castaneus feasting on young trees. In the last vegetation growing season, the expansion of mistletoe had a serious negative influence on coniferous forests.

Leafy species also die out. Oaks and even birch on shallow soil. Ash trees in forests along the Bystrzyca river die out at an alarming rate, and it is not wholly due to the fungus Chalara fraxinea which is decimating ash all across Europe. Forests of all ages, classes, young and old wither away.

Of course, different regions in Lower Silesia suffer differently. The worst-hit are those with a high percentage of spruce. At least half of the 33 forest districts in the region have this problem. A measure of the seriousness of the situation is the amount of lumber from sanitary cuts. Last year these cuts amounted to 1,7 million m3, which is over half the lumber collected in the region, and 56% more than in 2017.

Also, the percentage of deadwood in the general amount of lumber gathered is dramatically bad news. Deadwood is acquired from dead or dying trees, attacked by numerous secondary pests, which have not finished their development. It is a true seedbed of pests, a deadly danger for further parts of the forest. Its neutralizing requires a quick reaction from the foresters  - cutting the trees down. In 2015 its percentage in the acquired lumber was 8%, last year it was 19%. This not only means that things are bad, but also that the future is bleak.

In many "spruce" forest districts it became necessary to stop all planned cuts and replace them with sanitary cuts and a fight with the disaster. As a consequence, almost all of the spruce acquired in the region was from sanitary cuts, and in the case of pine – slightly less than half.

If we take the sanitary cuts as measure of the disaster, then the hardest hit were the forest districts of: Świdnica (almost 138k m3), Bardo Śląskie (104k m3), Żmigród (98k m3), Kamienna Góra (96k m3), Świeradów (85k m33) and Milicz (82k m3). The last four places are taken by districts clearing the after-effects of hurricanes of 2017 and 2018. (The size and character of windfall increase the risk of secondary pest invasion.)

Those statistics do not fully reflect the seriousness of the situation. Miękinia district cleared 44k m3 of deadwood, mostly pest-ridden, from windfalls. It could be said it’s not much compared to other districts, but if you take into account that spruce forests are concentrated in just one region of Sobótka, in the massif of Ślęża, the scale of the problem become apparent.

The spruce calamity has become a European problem. Planted by man, these artificial spruce are dying out almost in the whole of Central Europe. This means that the wood market is flooded with cheap deadwood. Our neighbors from Chechia, Slovakia, and Germany are quick to tempt the Polish producers, especially those near the frontier, with their offer. Robert Szlachetka, head of Wood Management Department of State Forests in Wrocław confirms it.

“There is a serious oversupply of deadwood spruce, but a general lack of high-quality primary product, which we offer. The cheapest wood now is from Chechia, but it is at most of class D, mainly useful for cellulose production. It is indeed cheap, but has not been harvested quickly enough and has degraded to the point that it has limited uses. Our southern neighbors were too slow to react, and by the way, it has increased the threat of spruce beetle in Poland, since pests know no borders. “

He then confirms that sanitary cuts have priority over the planned ones, so obviously the primary material is of lower quality. Apart from the spruce beetle, the windfall from windstorms is a problem. Broken and overturned trees are easy prey for secondary pests. This opens the way for fungus infections, and accelerated lividness of the wood, so the Silesian foresters are interested in quickly clearing it, and are offering price discounts.

The clients are choosy, but they also calculate the costs, and conditions of delivery, because transport from afar is not profitable. So they choose our offers. Economic calculations and quality are the deciding factors, otherwise, they would be buying from our competition – concludes Robert Szlachetka.