The storm after the hurricane

Nature's Armageddon, or a rather frequent natural phenomenon? The natural course of events or a disaster? Despite the two years which passed since the hurricane that destroyed large swaths of Poland's forests, and especially the Tuchola Forest, the debate about it is still heated.

Even before the foresters were able to clear away the first felled and broken trees, it had already been stated that... it was all their fault.

The argument was, that the worst hit were the areas with pine plantations. In fact, in the forestry region of Toruń, the wind destroyed 22k ha of forest, 35% of which were mixed and fresh forests on fertile ground. Near Gdańsk it was the same – the hurricane went through the highest quality tree stands – beech was felled as easily as pine. Spruce, birch, oaks – the hurricane did not discriminate.

What about that pine? 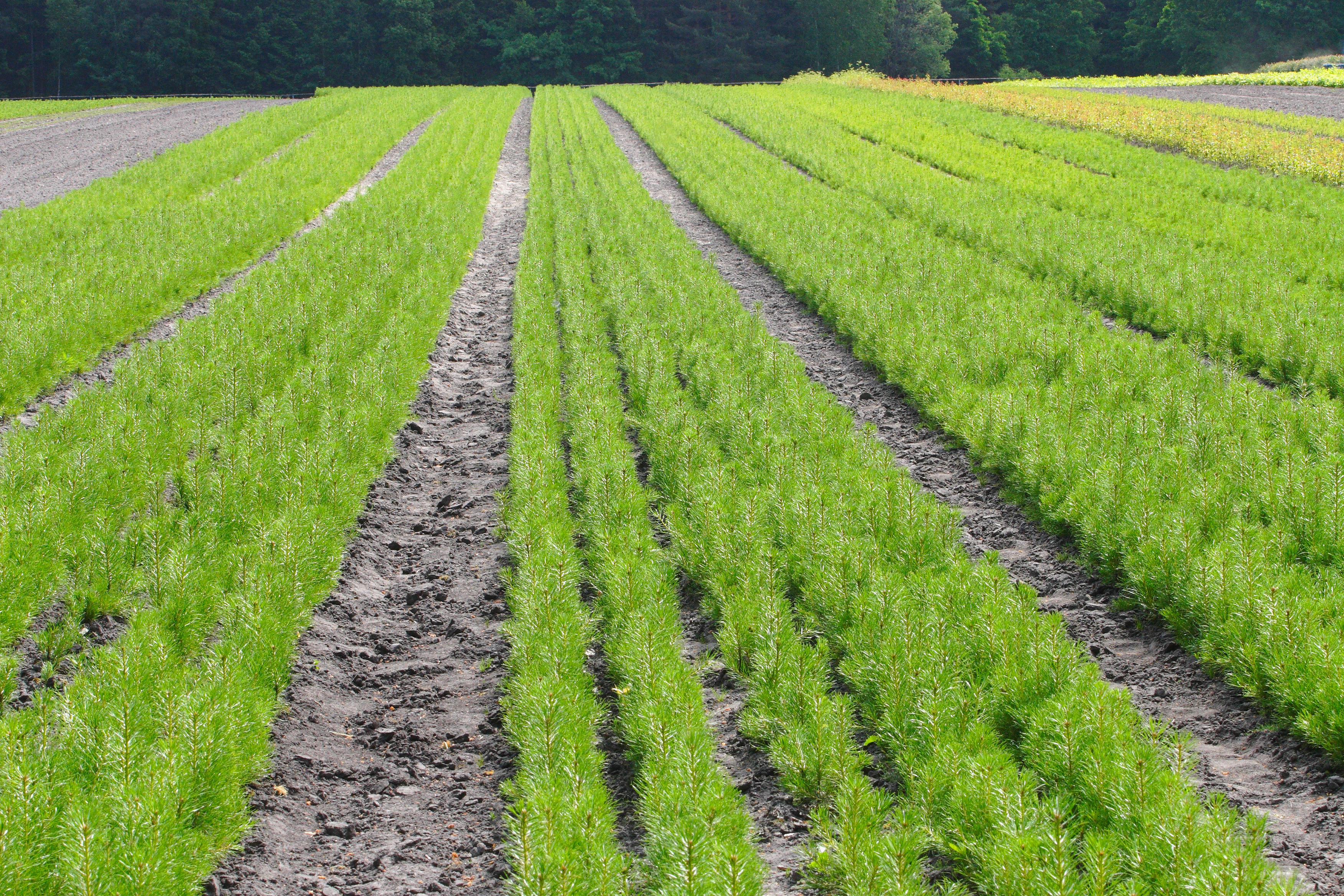 Arguments do not lack ammunition. On the one hand, the team of Dr. Słowiński, from the Department of Geography of the Polish Academy of Science has (by analyzing the biogenic sediments from the lake)  confirmed that the Tuchola Forrest has in the past been a mainly mixed forest, with only a small addition of pine. As time went by, the pine percentage increased, and the proportion of hornbeam, lime tree, or beech decreased. This was due to extensive, large-scale wood-cutting. These valuable and indisputable findings cannot be applied to contemporary forestry activity. The current owners of these forests inherited their structure from their predecessors, who for centuries plundered the forest, and planted pines in place of the trees they cut down.

It is also difficult to accept the conclusion of Dr. Słowiński, who unequivocally states foresters should learn from those mistakes but instead are continuing to plant pines.

Prof. Jan Markiewicz From the Geography Department of Warsaw University states that the Tuchola Forrest will never exist without a significant percentage of pine. He points out the region-specific, semi-natural moss forests which are considered part of the Nature 2000 system, or the most prevalent fresh forests.

Pine should be the main species here, due to economic but mainly natural considerations. It's a native species, well adapted to the poor soils, which creates specific forest ecosystems.

Most of the damage was in mixed coniferous forests and fresh forests. This is why 60% of the surface will be re-planted with pines – says the chief forester of Lipusz. He then adds that wherever possible, especially on richer soils, oaks, birch, beech, and melliferous plants like hawthorn, alder buckthorn, Sorbus, or pears shall be planted. 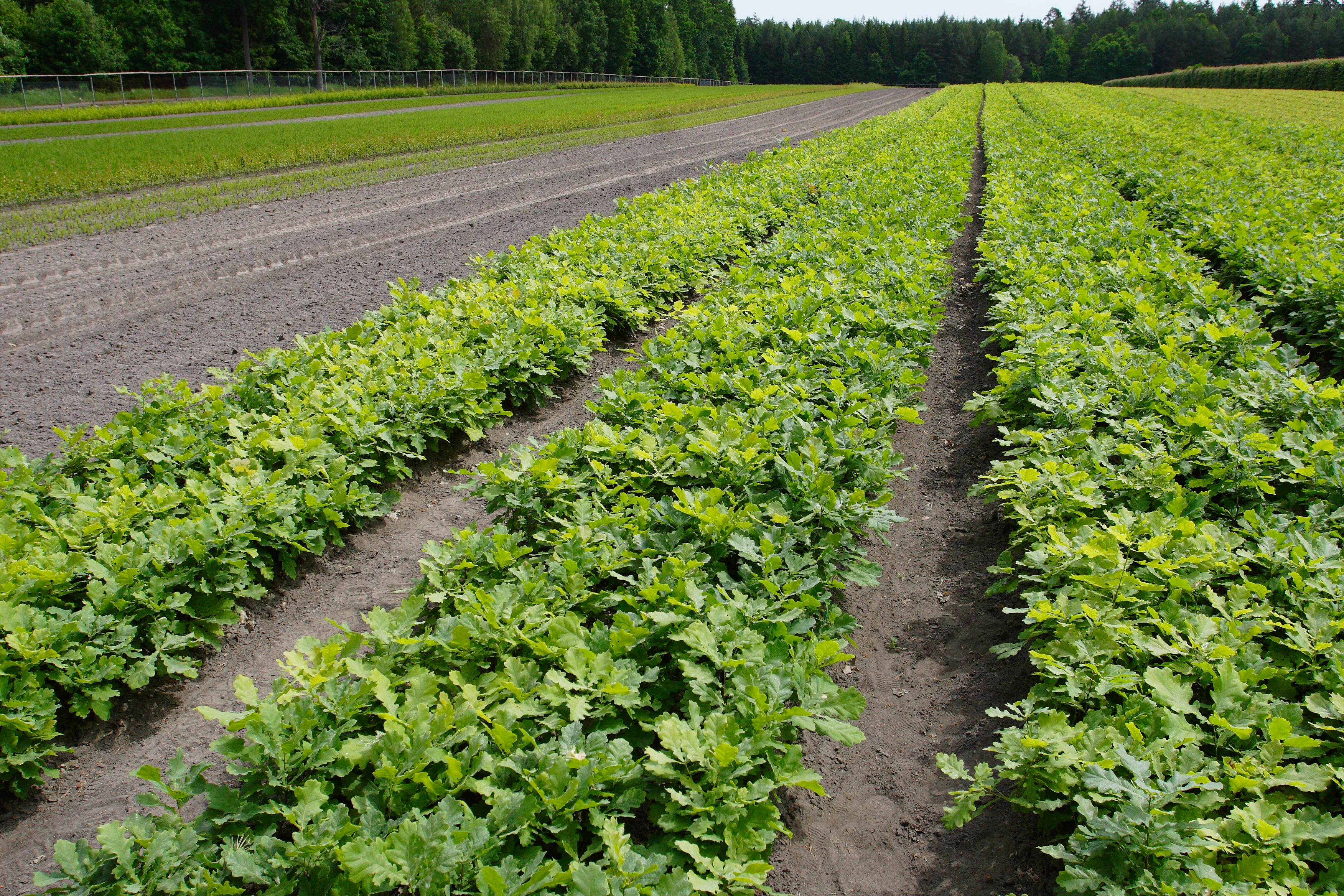 Foresters know that a forest with a varied species composition is more resistant to external dangers, including hurricanes. Only around Toruń foresters prepared around 180 variants of species mix which they intend to use in forest renewal.

Contrary to the opinion that foresters plant new generations of monoculture, they take great care to use spontaneous, natural regrowth.

In the forest district of Lipusz 85% of open spaces, which simply cannot support natural regrowth, will be renewed artificially. The rest – naturally.

Fresh and mixed coniferous forests will be renewed with pine and birch. Each renewed surface is treated individually, with maximum use of its resources. So, whenever possible, the foresters will also plant pine seeds with lime tree and oak additions.

The case of „Whoosh”

In July 2002 the wind destroyed swaths of Piska Primeval Forest. This became a kind of testing ground for foresters. The cataclysm was declared a perfect opportunity to observe the natural processes of regrowth without human intervention.

A group of scientists under professor Kazimierz Rykowski from IBL, in cooperation with the Pisz Forest Inspectorate, has asked the Management of State Forests to leave the most destroyed fragment without human intervention. This request was granted by the Ministry of Environment. 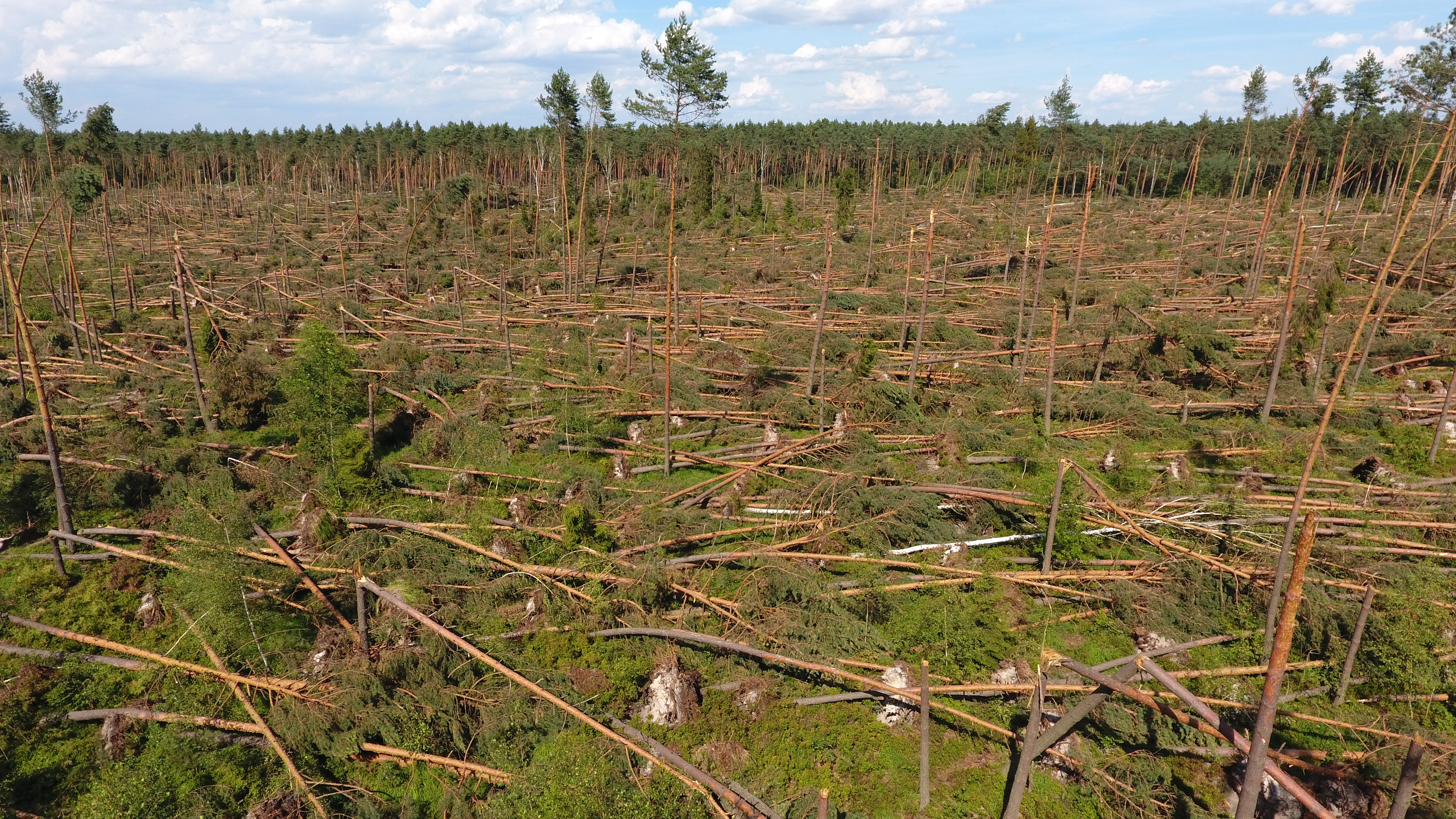 From the 12k ha of destroyed forests in the region, 475 ha were excluded from forest management. That's how „Whoosh" was created. For many ecology activists and scientists who disagree with the Management of State Forests, it's a symbol of perfect forest management. They argue that with the lack of human interference after a natural disaster, natural forest regeneration is often quick and underappreciated. Since such regeneration decidedly increases the forest biological diversity, most of the territories which suffered the hurricane two years ago should be left alone. 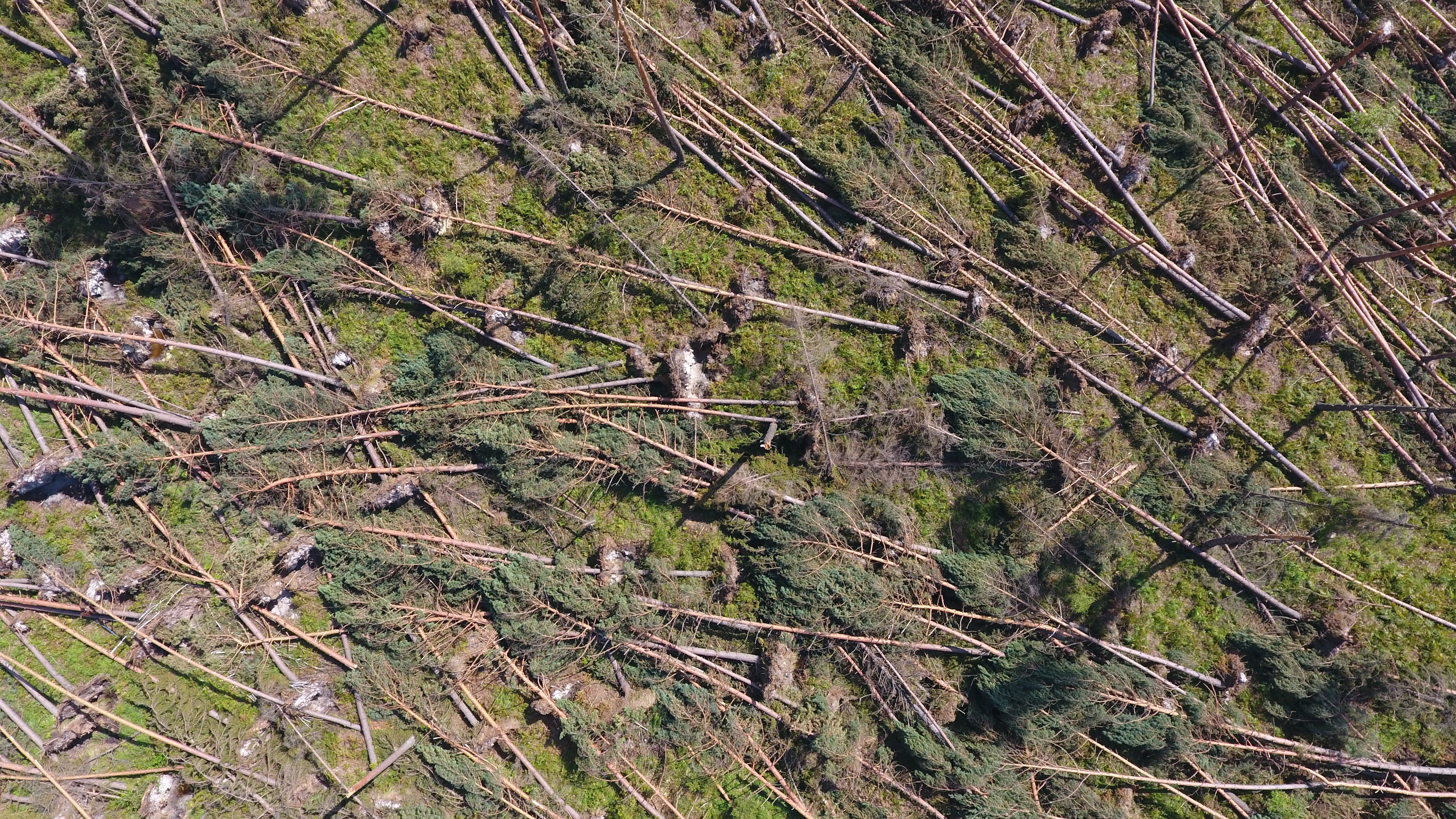 The arguments against this idea can be economic, social, or natural.

Spontaneous succession which we would have here cannot be identical with the natural one, since the starting point is far removed from a natural state.

De-forestation and a specific way to manage the forest in the past have greatly reduced the occurrence of some indigenous tree species. This has reduced the availability of seeds of some tree species which should be characteristic of this habitat. This is especially true of oak and beech, whose seeds do not travel great distances. Therefore natural succession would promote species with light seeds, common in areas struck with disaster. In practice, it would maintain a state of reduced biodiversity, and not lead to a return of the natural state. Only areas where conservation is most important – nature reserves and lakeshores.

One thing is sure – with or without human help, nature will manage. But what about local inhabitants? One of the scientific articles about the drama of the Piska Forrest in 2002 states that ideas about the total destruction of the forest are just a result of psychological shock after the disaster, and the idea of a destroyed forest is in fact fiction?

In Tuchola Forest the local landscape was totally changed in a day, says dr Agata Konczal from European Forest Institute in Bonn, environmental anthropologist. She adds, that such sudden changes can shake people's identity and their link with the place they live.

Research shows that the role of the landscape is very important in building community links, feeling of belonging. Its loss can mean erasing a part of local history, also that transmitted orally.  Abilities or jobs linked with a certain landscape – linked with tourism, recreation, health, aesthetic or spiritual values. It is important to ask what services will be provided by the inhabitants of Tuchola Forest in these new circumstances. The answer is important because it concerns the inhabitants directly. Until recently, Tuchola Forrest was linked to the tourist industry, based on the forest and what it provided. Perhaps now the solution will be disaster tourism, popular in the world.

It is difficult to speak about people living in devastated territory without mentioning the local labor market.

After the hurricane there was some boom for certain sectors of this market – every pair of hands was needed for repairs and clearing the forest. This meant an increase in pay for local inhabitants. There is a question though of lost revenues, for example from forest foraging.

The enormous amounts of lumber gathered from the windfall gave rise to the myth of a supposedly giant fortune reaped by State Forests from its sale. A year after the hurricane the media were estimating it to be around 35 million Euros, from selling lumber to paper mills, cellulose factories, producers of load pallets and boards.

The truth is that the eventual profits will start to be counted only after balancing all the costs incurred until the next generation of the forest will be ready for harvest. The majority of costs so far have been the expenses linked with the clearing of the felled and broken trees – around 25 million Euros countrywide. Cost of repair of forest and village roads have to be added, as well as soil preparation, production of millions of saplings, their planting, protection from insects and animals, etc.