There will be no desert

Due to climate change, pine, spruce, larch, and birch will disappear from our landscape. These trees form 75% of the surface of our forests. Hundreds of species of plants, mushrooms, and animals will disappear with them. 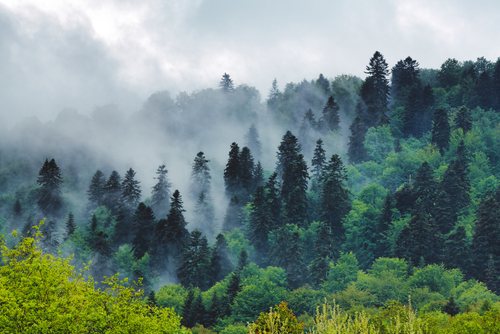 This is the start of an appeal, signed by many eminent scientists,  published on September 11 on the Polish Academy of Science web page.  Even its title is grimly impressive: “Gloomy scenario for Polish forests: a drastic change awaits nature.” A week earlier, based on the Polish Press Agency pre-release of the publication findings, the media took up this hot subject, embellishing it for their purposes.

When the media visions reached Armageddon level, Professor Andrzej M. Jagodziński, director of the Institute of Dendrology in Kórnik, one of the initiators of the appeal, decided to clarify matters. "It is not deforestation that we are facing, but the supplanting of some spices by others, and therefore a revolutionary change of ecosystems." – The professor explains on the PAS web page.

What does this mean in practice?
Pine, larch, and birch, which account for 75% of the forest surface in Poland are most susceptible to the effects of the rise in global temperature and its indirect consequences. Therefore, the above-mentioned trees will start losing their climatic optimum, and as a result, will start disappearing from Polish forests.

For a while, foresters have been conscious of this problem, and have been rebuilding forests in Poland. In place of spruce or pine growing of rich soils, they are introducing oak, beech, lime tree or maple, tree species for which these conditions are optimal. Undoubtedly this situation is serious if this change was to happen "during the lifetime of people who are now 40-year old."

The effect of the systematic rise in CO2 levels in the atmosphere is often accentuated in expert's reports. Less attention is paid to the consequences of deposition (relocation and sedimentation) of elements and compounds, that get from the atmosphere to the environment. Compounds of sulfur and nitrogen are especially important in this respect. While the so-called "acid rains", (precipitation with acid reaction) being the result of combustion products in the industry and power industry, have lost prominence in Poland due to the stringent regimen of desulfurization of exhaust emissions, the problem of excess nitrogen remains unsolved.

Professor Jarosław Socha from the Forest Department of Farming University in Kraków estimates, that in the forties of the last century, the average deposition of nitrogen in Central Europe was around 2,5-3 kg/hectare yearly. Today, in Poland it averages 9 kg/hectare yearly. This results in dangerous changes (eutrophication) in water and land ecosystems. Nitrogen excess results in a quicker growth rate of trees, but without appropriate root systems. Useful mycorrhiza disappears, and dangerous fungal pathogens activate. Such forest strands are less resistant to lack of water and droughts, and more often wither away. (Check the interview with prof. Socha in “Głos Lasu” 7-8 2019.)

“The last twenty years, ash trees have been quickly withering away due to the dangerous Chalara fraxinea sickness. We practically produce no saplings in our nurseries, since the trees die at any age, also in the early stages of development. This is not only our problem – it's the same case in the whole of Europe. France has serious problems, since ash, which in Poland has a very small percentage share in the forests, accounts for 15% in France. Attempts to produce an ash variation resistant to this disease, have not been so far successful. But let us not exaggerate – perhaps the situation will change, and ash will be like fir tree. Years ago fir was said to be doomed to extinction in Polish forests – now its population is developing surprisingly well.”

Krzysztof Rostek, head of the Forestry Cultivation Department has a similar view. “We do not see any symptoms of the ash disease receding. Some hope can come from the Forest Bank of Genes, which collects seeds from ash trees that have proven resistant to this disease. For now, this deposit awaits better times – when the situation improves, it shall become the foundation of returning to our forests this precious species, virtually irreplaceable in wet habitats. Elm trees face a similar problem – fungus-induced graphiosis, called elm’s Dutch disease. But elms nowadays, if planted separately, are doing quite well. Perhaps the same will happen to ash?

Aldona Perlińska points out that also the oak, considered the epitome of strength, is not always able to resist the effects of climate change.  In the famous Oakwood of Krotoszyn, huge amounts of lumber are being acquired from tree stands strongly weakened by lack of water on this territory, characterized by specific soil conditions. Secondary pests– Xyleborus, Platypus cylindrus or Agrilus biguttatus feed freely on the trees.

Worrying information is coming from Lower Silesia, for example from Miękinia, where oaks strands which used to be periodically flooded, are withering away due to drought. Taking all this into account I am surprised that people believe that oak will survive. Perhaps it will, and I would be very happy if it did. But no one can guarantee, that it will keep its current position in Polish forests. It’s like reading tea leaves and chicken entrails.

And finally beech, the fourth of the candidates for survival listed by PAS. Aldone Perlińska describes its situation:“Until recently we thought this species very resistant to disease and pests. It doesn’t have as wide a range of pests as other species. However, we now have signals from Northwest Poland, that beeches tend to wither out there, without any symptoms of pests or infections. Probably the deepening water deficit is the only reason.

The weakening of tree strands is visible in the proportion of sanitary cuts. Today they are in the region of 30%, while 10% is considered to be a cause for worry.

Historically speaking, the forest economy concentrated on the exploitation of the forest, less on its cultivation. The consequences were obvious. Nowadays, while of course exploitation is important it is not the main thing – foresters try for the forest strands to fit the habitat, have many generations, be multi-layered, and with varied species. This reduces the risks linked with monoculture. If such a forest strand suffers for example from withering of ash, it will be thinned out, but not destroyed – its other species will use it as an opportunity to expand. This will obviously not happen in monocultures.

A general consequence of climate change would be the migration North of some trees. One could expect many insects to follow their hosts on this voyage. There is also the possibility of foreign organisms being carried along with the international plant trade, wood import, or even tourism. Released on new territory they could create serious economic losses, as well as endanger indigenous species.

We don’t know how to deal with pests coming to us from Southern Europe. In their own habitat they may not be too dangerous, and the foresters there may know how to contain them. We lack such knowledge – says Aldona Perlińska.

The pressure of foreign insects, pests, all sorts of organisms, and disease is already visible. A case in point is the expansion of Bursaphelenchus xylophilus, commonly known as pinewood nematode. This dangerous parasite comes from Japan, but it got to Canada and the Iberian Peninsula, probably with imported coniferous wood. In Portugal, it led to the dying out of around 1 million hectares of forests, and it crossed over into Spain. What is especially dangerous is that this species is typical to pine, so numerous in Polish forests, and would find conditions here perfect. This small, difficult-to-discover nematode is transported by the pine sawyer beetle from the Cerambycidae family, an excellent flier by the way.

We notice increasing amounts of pine sawyer beetles in Poland, so weakened pines would fall easy prey to their "passenger". We are preparing procedures for dealing with this pest. Especially since the first cases of its presence were discovered in Gdynia, in palettes that came with some transport. Thankfully, the phytosanitary services discovered the unwanted guest.

Some experts predict that climate change dynamics will increase – droughts will be more intense, temperature higher, water deficit bigger, extreme weather events more numerous and destructive, damage in forests more extensive. Others claim that in 5-8 years, rains and cooling of the climate will come. Such voices were raised during the last Madrid conference on stopping climate change – COP 25.

It is however possible, that should climate change prove drastic, some prejudices against certain foreign tree species might have to be dropped. The first candidate is the Douglas fir, introduced in Poland in 1833, and it would be difficult to call it a foreign species. Of course, we must remember how the opening of our forests to invasive species like black lotus or black cherry, but the Douglas tree poses no such threat.

Perhaps other species might be taken into account. Some scientists are suggesting to start experimenting with the so-called supported migration, small-scale experiments with trees characteristic to the South of Europe. We are prepared for any scenario. We have a high-quality seed base, Forest Gene Bank, modern plant nursery, scientific research.

Anyway, it’s too early to speak of forests in Poland dying out. One of the main problems would be if something bad were to happen to pine on a really large scale. There is no alternative to pine in Poland – it occupies the weakest soils, that were considered inefficient for farming. If pine were to capitulate, it would be a tragedy. Thankfully, we are far from such a case – sums up the Head of Faculty of Silviculture.

The storm after the hurricane
We are close to ... our suppliers