It appears evident that pollutants emissions into the atmosphere affect climate change and climate change can affects air quality. However, not everybody is aware that aerosols play a crucial role in these processes. Interactions between air pollution and climate are complex, and not all the relationships have not yet been fully understood, there is growing scientific evidence for this field.

There is no doubt that pollutant emissions into the atmosphere contribute to the greenhouse effect. In this regard, we usually focus on the so-called greenhouse gases, i.e. carbon dioxide or methane. However, aerosols emitted into the atmosphere from natural and anthropogenic sources have direct and indirect effects on climate change as well. Some aerosols enhance atmospheric heating, while other scatter and reflect solar radiation reaching the Earth's surface. In scientific literature, the effect of aerosols is quantified in terms of radiative forcing that determines the occurrence of the greenhouse effect contributing to the currently observed trends of temperature and precipitation changes. Moreover, climate change can cause the feedback loop and support aerosol formation or disappearance in the atmosphere over some regions (1,2). 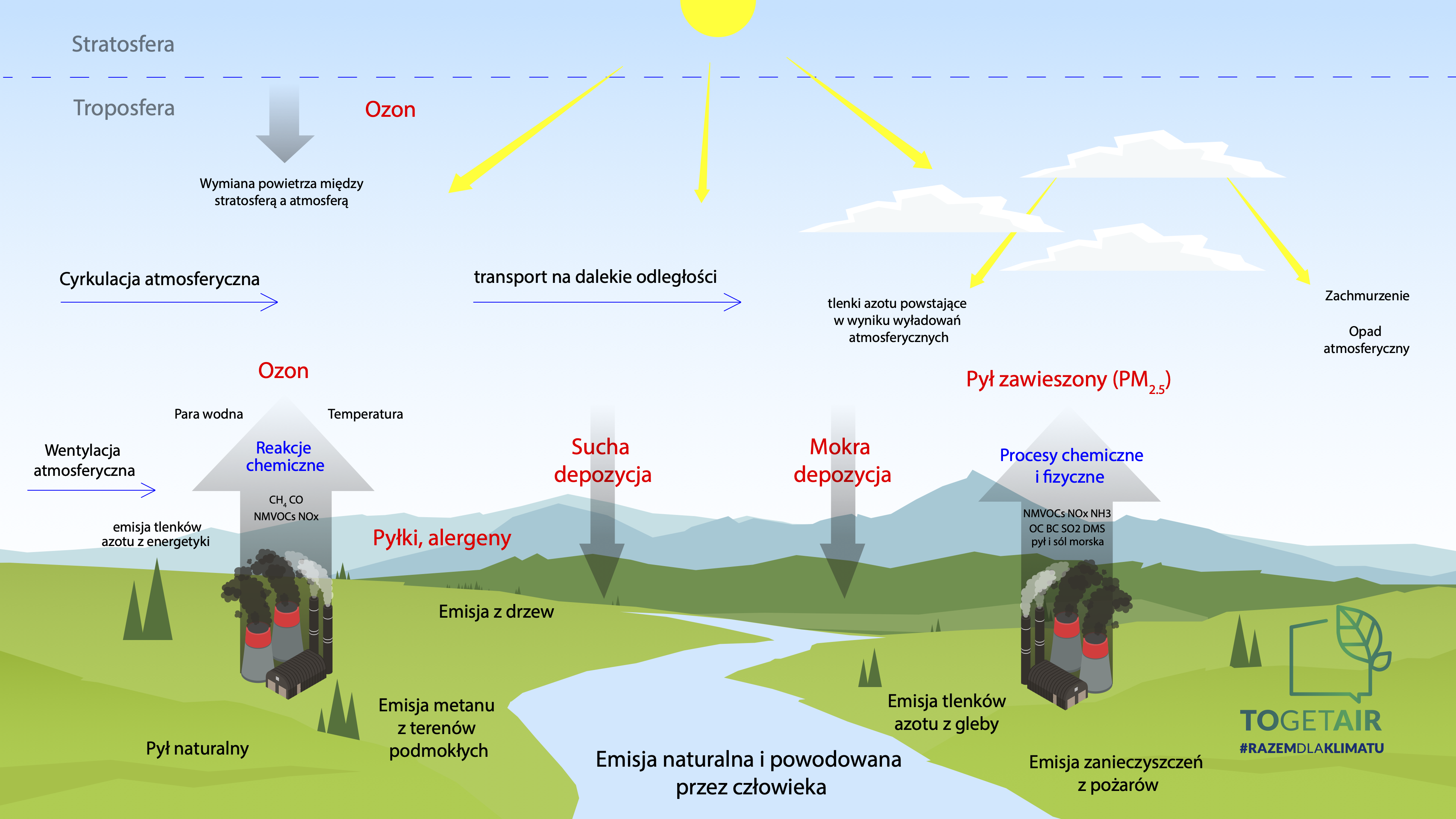 The overall diagram presenting relationships between air pollutants and climate (3)

Atmospheric aerosols (defined as a suspension of solid and liquid particles) come from natural or anthropogenic sources. Natural sources include, among others, volcanic eruptions, evaporation of ocean water and emissions of volatile organic compounds from plants. Anthropogenic (originating in human activity) aerosol sources are mainly associated with fossil fuel combustion to generate electricity, the industry, households and liquid fuel combustion for transport energy purposes.

Aerosols can be emitted directly into the atmosphere, e.g. suspended particulate matter, allergens or various gas types, which can form atmospheric aerosol particles (the so-called particulate matter precursors). In such a case, we speak of primary emissions. Aerosols formed in the atmosphere as a result of physical and chemical reactions are referred to as secondary emissions. Both types of the emissions should be considered in view of climate protection and air quality improvement.

The main components of the atmospheric aerosol are inorganic compounds (e.g. sulfates, nitrates, ammonia, and salt from ocean water), organic compounds (often referred to as organic aerosols), black carbon (a distinct type of carbonaceous material formed from the incomplete combustion of fossil and biomass based fuels under certain conditions), mineral fractions (mainly desert dust and dust lifted from drylands), and biological particles from plants. Research results show that anthropogenic sources are responsible for the presence of black carbon aerosol, sulfates, nitrates, and ammonia in the atmosphere, whereas salt from ocean water, the majority of mineral dust and organic compounds originate from natural sources.

The amount (concentration) of a given type of aerosols in the atmosphere and aerosol properties (absorbing or reflecting radiation) determine the climate of a given region. The difficulty in assessing impacts of different aerosol types on climate is mainly due to incomplete understanding of complex processes between natural and anthropogenic emission sources and their interactions with the thermal and hydrological cycle (1,4).

Effects of aerosols on the radiative effect of the atmosphere

Atmospheric aerosols affect the radiation balance, i.e. they change the flux of radiation reaching the Earth’s surface from space, through scattering and absorbing. This is determined by dimensions of atmospheric particles as well as their shape, chemical composition and type. Some aerosols lead to an increase in the energy absorbed by the atmosphere, hence they contribute the greenhouse effect, whereas other (existing in the vast majority) have reducing properties, and as a result they contribute to greenhouse effect mitigation (1,2).

Clouds influence the balance of energy retained in or removed from the atmosphere. Their formation or disappearance are influenced by aerosols. A large number of aerosol small particles in the air (hygroscopic aerosol) are referred to as cloud condensation nuclei, which directly stimulate cloud formation. A characteristic example of emission of aerosols and condensation of water vapor in the atmosphere are condensation trails formed behind airplanes. In the atmosphere near the Earth's surface, cloud formation is influenced by, among others, aerosols containing salt, e.g. marine aerosol. For clouds to form, the aerosol altitude and properties (whether absorbing or scattering) are important factors. 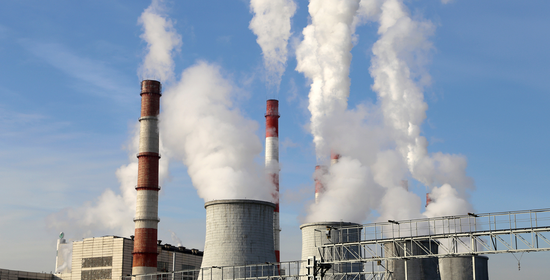 Black carbon is an example of an aerosol that strongly absorbs radiation. Its presence in the atmosphere containing significant amounts of organic carbon leads to significant absorption of solar radiation, and therefore, the reduction of the radiation reaching the Earth's surface. Furthermore, black carbon aerosol radiate the absorbed energy as heat. Consequently, when such an aerosol is inside a cloud, it causes cloud cover to decrease, as it emits thermal radiation and warms up the air, water droplets and ice crystals forming the clouds and leads to their evaporation. Once below the cloud base, such an aerosol enhances cloudiness through warming up air - warm air rises into the upper atmosphere, and as it goes higher cools and condenses.

The opposite of black carbon is the aerosol containing significant amounts of sulfates, which are formed in the atmosphere through chemical reactions. This aerosol type has the property of scattering and reflecting radiation, and - in high layers of the atmosphere - to direct solar radiation back into space. This effect is called the negative radiative forcing and means that the Earth loses more energy to space than it receives from the Sun, which in turn causes cooling. Conversely, when temperatures rise, there occurs the positive radiative forcing - that is climate warming (1).

The radiation balance in the atmosphere is undoubtedly influenced by aerosol composition Climate change is manifesting itself in many regions causing, among others, changes in the structure and frequency of precipitation resulting in droughts, which in the case of a lightning strike can lead to natural forest fires, as recently observed in America (United States), Australia, and Europe (Spain and Portugal). Fires are a significant source of aerosol emissions (mainly particulate matter) to the atmosphere. Therefore, they can have a significant impact on climate change across continents, which in turn can contribute to the formation of aerosols.

In many world’s regions, there has been observed climate change impact on the duration of vegetation seasons. This can result in increased emissions of natural aerosols, as plenty of the secondary aerosols are produced due to plant flowering and pollen shedding, as well as oxidation of natural compounds emitted from forests, such as essential oils and resins. These natural aerosols contribute to the formation of another air pollutant - ozone. Sunny weather (increased radiation) and high temperatures are conducive in this case. Therefore, the problem with excessive ozone concentrations occurs mainly in the summer.

Volcanic eruptions are one of the natural and dominant sources of aerosols causing rapid and noticeable changes in air quality and climate, through introducing significant amounts of ash, sulfur compounds and carbon dioxide into the atmosphere. In this case, it is sulfate aerosol rather than particulate matter or carbon dioxide that has a significant impact on climate. Due to small size of particles, this type of aerosol remains in the atmosphere much longer (up to a year) than other aerosols and effectually scatters incoming solar radiation.

Aerosols, both natural and anthropogenic, especially - suspended particulate matter and allergens,  considerably affect human  health. On the one hand, climate change may significantly alter both the conditions for formation and emission of bioaerosols through, among others, extending the vegetation season and flowering periods of numerous plant species. On the other hand, aerosol emissions associated with human activities as well as those from natural sources introduce significant amounts of black carbon and particulate matter into the atmosphere. These aerosols may cause an increase in the frequency and severity of symptoms of cardiovascular and respiratory diseases, including asthma, allergic diseases, and hay fever (5).

Control of emissions and air quality

That is why, there have been gaining importance the activities undertaken with the aim to inventory the emission of aerosols and their precursors into the atmosphere and control anthropogenic emission sources, as well as to take actions towards emission reduction. In Poland, the main source of fine particulate matter PM2.5 emission are sources associated with fuel combustion. 85% PM2.5 total emissions come from domestic fuel combustion, and the major part (over 50%) comes from burning hard coal and wood in households. The share of PM2.5 emissions from the industry and energy sectors is 23%, and that from transport is 10%. Even though since 1990, there has been observed a substantial decrease (11.6%) of particulate matter emissions, no significant changes in emissions has been observed in the recent years. In the case of black carbon, decreasing emission trends are not evident. Among the factors accounting for this are the main sources of emissions i.e. road transport with prevailing vehicles equipped with compression-ignition engines (37% of emissions come from road transport) as well as coal and wood burning in households (48%) (6).

Actions taken to improve air quality, including the tightening quality standards for solid fuels marketed in Poland, the introduction of local bans on burning solid fuels (so-called 'anti-smog' resolutions) and launching various programs and financial instruments to support reduction of household emissions (including funds for thermal modernization, replacement of furnaces with zero or low-emission ones and subsidies for renewable energy sources) indicate a noticeable downward trend in the concentrations of PM10 in the atmosphere, which has become evident  since 2011 – a decrease by 68% (7).

Author: Krzysztof Skotak, IOŚ-PIB
Material from the Institute of Environmental Protection - National Research Institute, the organizer of the Klimada 2.0 project