Will the experience of the pandemic influence our attitudes towards climate change?

The coronavirus pandemic enforced the change of some of our everyday behaviors. It was the most visible during the lockdown protests whilst the restrictions from above influenced the way we work, travel or, do shopping. Some of those restrictions can have positive outcomes in the future for building low-carbon societies.

How to use the pandemic for mitigation?

To build a sustainable economy not only systemic changes in the energy branch are essential but also changes at the social level. The starting point is the awareness of climate change and the modification of behaviors in the range of responsible consumption and ecological lifestyle (waste segregation, mitigation of emissions through the proper diet, usage of bicycles, and public transport instead of cars).

Triggered by the pandemic the temporary closure of restaurants, cafes, institutions of culture, and also the appeals of authorities to stay at home to limit people-to-people contacts lead to the demonstrable slowdown of the social life and also its reformulation. We have been using online services and working more online, we have less often been traveling. As these are changes party convergent with those, which will help in the inhibition of climate change, the National Center of Climate Change (pol.  Krajowy Ośrodek Zmian Klimatu) decided to check to what extent Polish people could become accustomed to the distinct reality. Thus the project „The circumstances of the change of social attitudes and lifestyle in the context of the actual challenges connected with the climate change through the example of the COVID-19 pandemic in Poland”.

The basic information on the research

The most important goal of the first part conducted in April and May of 2020 was the checking if the crisis connected with the appearance of the highly contagious virus could, apart from the fatal consequences for the public health and economy, become a turning point for the change of attitudes towards the climate change. According to the initial intention, the research should be repeated on the same sample after the passing off of the pandemic. At the moment we don't know when it will take place.

The research process was designed in a complementary way – it includes both qualitative and quantitative tools. The first component included 150 deepened interviews which were conducted through a video communicator. The research tool was adjusted to the conditions of that time (national quarantine). The most important variables differentiating interlocutors were places of residence and family and professional situation. What is essential, the interview questionnaire was constructed in such a way so as not to ask about behaviors or pro climate convictions directly. The data obtained at this stage were complemented with the quantitive part. The Internet survey had a representative character (its results can be translated to the whole society. The trial was 1091 Poles.

During the construction of the research questions, its creators focused on diagnosing the potential to limit high-emission attitudes, having an influence on the carbon footprint of individuals. They encompass such areas as ways of transportation (automotive, by air) and consumption. In the case of this last phenomenon, both its direct expression (shopping) as well as connected with its „refective” aspects as minimalism or self-sufficiency were examined were examined.

One of the areas of the everyday life of Poles during the pandemic, which was examined by KOZK, was  transportation. This is one of the crucial sectors, awaiting transformation into more sustainable, because next to the industry – it is the main source of the harmful emissions of carbon and nitric monoxides, deepening global warming. Here also the results of the survey part presented optimistic changes.

The encouraging research result in the transport question is also the fact that half of Poles claims that rarer use of a car, to the great extent, contributes to preventing climate change. Admittedly, despite the memorable scenes of empty streets, which made the impression as if cars were not used by anyone at all for a while, the results of the survey indicated fewer spectacular constraints. One fourth of drivers admitted that during the pandemic they used car rarer. 60% of motorized claimed that nothing had changed for them in this area and around 15% declared that they were using a car even more. Apart from the actual state, KOZK asked also about the possibilities of making the change in this regard in the future.

It turned out that even 63% of Poles would be inclined to limit the usage of a car after the pandemic (31% of Poles is ready to limit traveling by car to the great and 32% to the moderate extent). Whilst 37% of the interviewees are not ready for such a step. What is important, in a group of people ready for the limitation of car driving, more than one-fourth (27%) are persons often using it before the pandemic. They were also more often women (62%), people above 55 years old (38%), residents of the countryside (31%), and persons with secondary education (34%).

The certain, negative effect of the pandemic which was observed during the research is the fact, that some of the people used a car more often than before. The interpretation of this result helped the deepened interviews. It turned out that the pandemic was accompanied by the decline of trust in public transport. As the main causes, the persons examined enumerated the fear of the infection and also the anxiety of the lack of seat because of the exceeding of the limit of passengers. In such a situation a bus or a tram stopped being safe means of transport which could be relied on (it will bring us on time where we want).

The travels by plane in a world of the pandemic

The old truth says, that the most difficult is to give up things, which we are used to the most. As the research of KOZK indicated, to flying – we are not.

Until 70% of Poles haven't flown by plane even once during the last 12 months. Around 9 in 10 Poles declares that in the future s/he can limit plane travels, including one third to a big or large extent. A similar percentage (32%) could give them up completely. Only 6% of interviewees are not able to stop using a plane as a method of transport.

According to the quantitative research plane travels is one of these high emission behaviors, which Poles could limit the most eagerly. It is explained by the data obtained from the qualitative interviews. As for today, the dominant cause is the fear of the coronavirus infection during a flight (small, closed space, shared with other passengers). In the case of business flights, the research participants point to the possibility of teleworking (becoming convinced of such form by employers and employees and spreading the tools which make it possible). The explanations appealing to the more climate-friendly activities appeared. The interviewees' replies can be divided into categories directly influencing the environment, for example appealing to the reduction of the flight numbers and influencing the environment indirectly, through appreciating the option of local traveling. The turnaround towards the domestic trips corresponds with the data from the quantitive part. One of the activities which we may limit in the future the most often (right after flying) is business trips. Additionally almost one-fourth of us can entirely abandon holiday trips abroad and one in three of people interviewed limit them to a big or large extent. 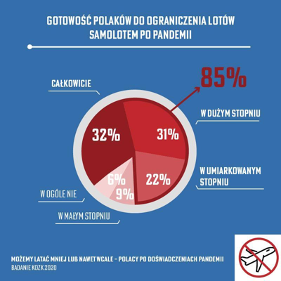 In a time of striving towards sustainable development the limitless consumerism, on which the existing paradigm of economic growth is based, has to change. The starting point of this change can be the awareness of the harmfulness of such a model in a perspective of environmental protection and the countermeasure of the climate change consequences.

As the research of KOZK showed, almost 60% of Poles recognize this interdependence. In the opinion of 11% of persons interviewed the limitation of consumerism helps in preventing climate change to the maximal extent and for 48% - to the big or large extent. Only 2% of interviewees don't recognize the connection the consumerism and climate change. For 8% of interviewees the strength of this dependence is low and for one in three Poles (31%) - moderate.

The unusual situation caused by the coronavirus pandemic influenced also Poles' reflections on the matter of the need for possession itself. During the first two weeks of the Spring epidemic up to 40% of interviewees often limited their shopping and 27% acted so with a moderate frequency. The sense of insecurity in the new situation favored the social reflection on what is important: safety, health, presence of loved ones and also space, and contact with nature. The pleasure shopping started seeming redundant. As the further results show, more than half of the persons interviewed admitted that they were inclined to limit such expenses a lot in the future.

Will the pandemic change our behaviors to more pro-climate ones?

The pandemic showed how society reacts in difficult moments – in the face of „the higher cause” we can mobilize and limit certain habits or customs. It is worth using this experience and the mechanism that rules it in the context of the strategies introduced to counter the consequences of climate change. The basic element is the readiness to limit high emission behaviors in the future. In which areas is the highest potential for change rooted?  According to the quantitative part of the study, the behaviors that we are ready to limit to the greatest extent in the future are: flying, abroad travels connected with work, or garments shopping (for pleasure).

The situation of lockdown showed that the ecological behaviors can start shaping themself on the unconscious level – as if in passing. It can have the connection with the psychological mechanism that persons who experienced the limitation of certain behavior because of external causes are more often ready to its mitigation in the future. In such a way they subconsciously rationalize the dissonance between the imposed from above action and from what would arise from their own will.

That doesn't mean, however that we don't recognize the influence of our behaviors on the climate. In the deepened talks with the participants of the research, the reflective motif is heard. The slowdown of life in the pandemic helped to stop and look at personal existence from a distance. As a result, the conclusions from such a self-analysis influence the conscious change of the patterns of consumerism and what is connected with it also the lifestyle to one more environmental friendly. Such a dependence in the context of limiting meat is recognized by one-third of us. In the light of these data it is visible as well that despite certain coming through of the ecological topics in the social conscience, there is a broad area for intensifying of educational activities, showing the relation between the climate and the lifestyle, to whose components belong  both the everyday way of transportation, the model of traveling or the widely understood consumption.

The open question which remains is to what extent the potential for change of high emission behaviors to those which generate the lower carbon footprint will stand up. To check the durability of the respondents' declaration against the change of attitudes, conducting another research in a time after the pandemic is needed. This time is still hard to determine.