The influence of climate change on human health

The estimated by the World Health Organisation influence of climate change on health in the period 2030-2050, will amount to over 250 000 premature deaths each year1. However, this number can be understated because the estimates haven't included the economic damages connected with heatwaves, floods, and the shortage of water. The essential role in the assessment of health risk is played by the interactions between climate change and other trends having an influence on public health such as the poverty level, migrations, the density of settlement, and the demographic changes.

Despite the mechanism of the health influence of climate change is not fully known, the results of the scientific research indicate the growing collections of the interactions and connections between the defined climate dangers and the potential health consequences. There is no doubt that climate change's influence on human health has both direct and indirect character2.

In the case of the direct effect usually, we talk about the consequences caused by singular climate threats connected with an occurrence and intensity of climate phenomena, often classified as extreme, differing with intensity and frequency of occurrence from the averagely observed in the last decades3. 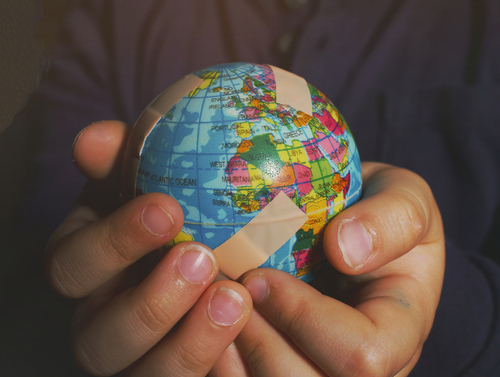 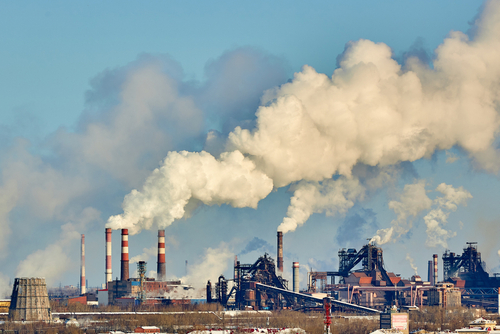 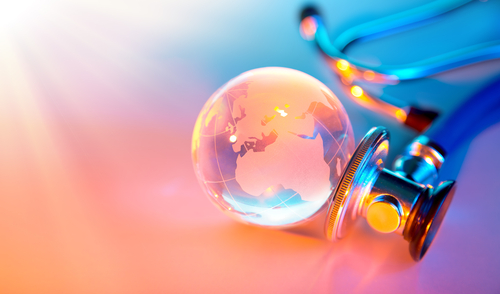 The appearance of these threats is strongly diverse in the scale of the globe. In the case of the European continent, there are such extremal phenomena like strong winds, tornados, hurricanes, intense hail, short-term storms. As a result of these phenomena each year we observe around 1000 confirmed cases of body injuries and approximately 300 casualties4. The often-used example is the occurrence of thunderstorms, however, health effects are random and incidental. Nevertheless, there is no doubt that the crucial and direct threat to the health of the general population of many countries, connected with climate change is the occurrence of heatwaves and chills5.

The decided majority of the health effects concerns, however, the indirect influence of climate change, observed as a result of the occurrence of complex environmental, economical, and social processes. The most common diagnosed indirect consequences include vector and waterborne diseases. Moreover, the health, economic and psychological consequences connected with the loss of possessions and the sense of security, or the limited access to food, and water for consumption become a big problem.

The four major threats in Europe 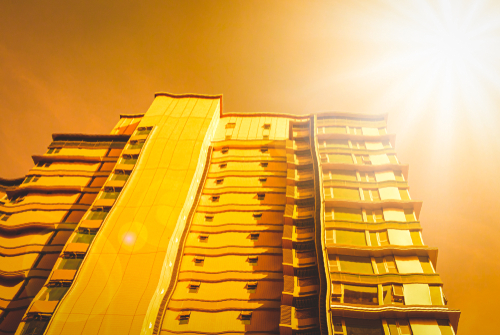 There is a scientifically proven tight relationship between high and low temperatures (not necessarily extreme ones) and the growth of illnesses, and deaths. Not only the temperature and its fluctuations but also the duration of heatwaves and chills has a crucial meaning8. Moreover, in the case of heatwaves, the essential role for health is played also by the intensity of the solar radiation, the high air humidity, and high temperatures at night. A heat stroke on heatwave days and hypothermia in winter are only a tiny percentage of the mortality rate and also cases of hospitalization. High and low temperatures are connected with a meaningful growth of the increased risk of the occurrence, or intensification of cardiovascular and respiratory system diseases. It is estimated that the health risk connected with heatwaves is bigger in the spring period when they appear before the population will get used to the summer temperatures.
Vector diseases 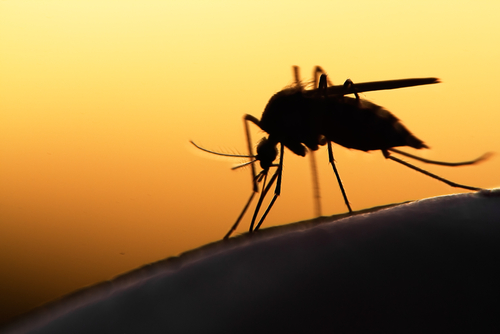 The estimated number of deaths on the global scale caused by vector diseases each year amounts to 600 0009. The factors influencing the growth of the risk of incidence are the climate changes of the thermo-humidity regime influencing the development and reach of occurrence of vectors, in other words, the species carrying viruses and germs. The main facilitator is the extension of the vegetative period and the increase of minimal temperatures what has a direct influence on the survival conditions and development of vectors. The multiplication of the risk of incidence of tick-carried diseases is confirmed among others by the increase in the incidence rate of Lyme disease, babesiosis, and the appearance of the spotted fever cases. Moreover, ticks are a vector of the virus infection which is tick encephalitis. Nevertheless, mosquitoes are responsible for the majority of dominating virus factors causing human infections in Europe. Moreover, the increase of the global temperature and the appearance of heatwaves favors blooms in reservoirs rich in biogenic ingredients, and therefore, the development of cyanobacteria producing toxins. Direct contact of humans with bloomed water can lead to numerous health complications. The consumption of fish and water invertebrates (shrimps, shellfish, snails) feeding on phytoplankton, and caught in the ecosystems prone to cyanobacteria bloom can be also dangerous.
Diseases carried by water and food 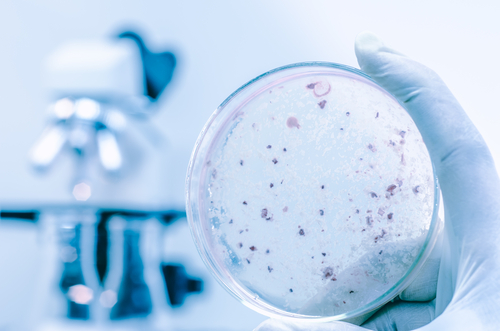 In this case, the health risk factor is the pollution of the resources of water intended for consumption and the increase of temperature of basins providing convenient conditions for bacteria growth. An example of this phenomenon is Legionella commonly appearing in warm, still waters of fresh-water reservoirs, where a temporary increase of a temperature takes place10. This bacteria is the main cause of Legionnaires' disease, which can be fatal for elderly people and persons with lower immunity. More and more often the noticeable problem is the appearance of bacteria in warm waters of coastal basins, of low and medium level of salinity like Vibrio1112. They can cause cholera, gastro-enteritis, or lead to serious infections of wounds.

Climate change, because of water shortages and droughts can have important implications for food security causing problems with providing water for consumption and food production13. It can influence the level of poverty, and also the capability of governments and medical service systems to cope with appearing health threats, including the changes in a diet. Climate change indicates that we should take into account the growing food prices and in consequence its diminishing availability. It will affect especially poor people who are one of the most vulnerable social groups14.

Diseases resulted from a flood 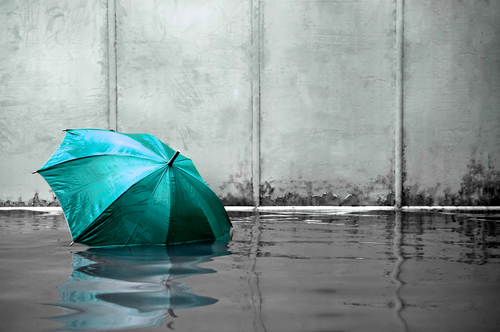 Sudden weather phenomena of a large scale and local floods caused by them have a significant influence on the health of populations affected by these phenomena. The results diagnosed in the first phase, which is the moment of a catastrophe, have a direct character – deaths, injuries, respiratory, or cardiological problems. The second phase of the negative effect is the indirect consequences, observed after some time, and connected with the deterioration of life conditions (for example as a result of destroying a house, a damage of infrastructure, a material loss of possessions, or a necessary evacuation), contagious diseases, and intoxications. Often omitted effects are also diseases appearing and diagnosed many years after the occurrence. Often enough connected with long-lasting stress, and mental afflictions (for example because of the loss of sense of security).

The social dimension of health 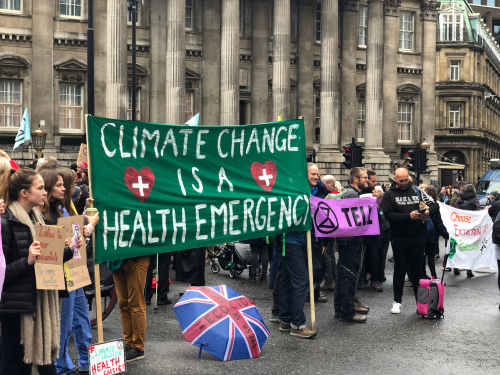 The evaluation of the health effects of climate change is immeasurably difficult to assess. It is almost certain that the poorest and most vulnerable communities will suffer in the first place but the mutually connected character of the climate systems, ecosystems, and demography can disturb the conditions of growth of the whole populations15.

Considering the observed demographic tendencies (mainly the aging of societies and general growth of population on the Earth), and urban (gathering of people in cities, considerable interferences in ecosystems), and also more and more often noticeable migrations of people in the face of changing climate – the number of people vulnerable to the climate threats gradually grows. This state has serious consequences in the context of planning suitable adaptive actions, including those directed to the protection of public health.

The adaptive actions taken to diminish the health risk of humans are not unequivocal and should be considered in a multi-layered multi-dimensional way. For example, the raise of areas of green-blue infrastructure (like constructing little retention or areas of greenery in cities) on the one hand diminishes the health risk connected with heatwaves, and heavy rains causing local flooding, on the other considerably raises the risk of vectors' appearance and the exposure of people to pathogens.

We should stress out that the influence of climate change on health in a certain, general population is not equally spread. The scientific research indicates the groups of people especially vulnerable because of socio-economical inequalities. Children belong to the most vulnerable groups, elderly people and persons with existing health problems, including the disabled. Climate change affects especially homeless, poor, and socially marginalized people.

Will the experience of the pandemic influence our attitudes towards climate change?
Thermal conditions in Poland 2011-2020 – the warmest decade in 70 years