Soil degradation resulting from agriculture is common all over the world. In most cases the rate of this process is higher than the rate of soil recovery. Furthermore, agriculture affects all ecosystems. Unfortunately, in the vast majority of cases this influence is negative. But there is  way to reverse this trend – a system of agriculture which benefits the farmer, the environment and consumers. Without compromise, according to the win-win rule.

In Poland a system of ploughing has been used for decades on most fields: after the harvest and before the aftercrop a plough drives onto a field, overturning and mixing the soil to a depth of approx. 30 cm. If we add fertilising, excessive spraying with pesticides, and often limited crop rotation, we have a full picture of modern agriculture. According to the statistics, in Poland, Europe, and in the world, the share of cereals in the structure of crops is as high as 80%. This results in a dramatic reduction of biodiversity of arable land.

Such practices have drained the soil over the years, resulting in its aridity and increasing the erosion, gradual resistance of pathogens to the chemicals used and, additionally, systematic deterioration in food quality.

On the other hand, there is organic agriculture. However, the modern varieties of crops are so delicate and sensitive to various pathogens (diseases or pests), that it is virtually impossible to eliminate completely plant protection products. Therefore, organic farmers often choose old varieties which are not as high-yielding as the newest ones. In addition, organic farms need higher expenditure, e.g. to employ workers for manual weeding etc. As a result, the price of produce grown in organic farms is higher and on top of that, its amount is insufficient to feed a constantly growing population.

It would seem – a stalemate. There is however an alternative to both systems – regenerative farming.

Food security (and beyond) starts with the soil

According to the FAO 33% of land in the world is moderately or strongly eroded. Erosion occurs wherever the land is sloping, the soil is exposed and there is heavy and intensive rainfall. Which is in almost every field in our country. The soil valuation classes we know: class III, class IV and brown soils, luvisols are all eroded soils. During rains they become waterlogged very quickly, water runs down them, taking the upper layers of soil with it. During one heavy rain up to 10 cm of humus can run off. This is crucial from the point of view of agricultural production, but also human safety – the more water runs off the surface of the fields, the more areas situated lower are at risk of flooding and waterlogging.

Conservative systems of agriculture are an effective solution in the fight against soil erosion. According to a simulation study carried out in Germany, strip tillage reduces surface run-off by 92% and loss of humus from soil by 95% compared to plough tillage. [1]

However, eroded soil needs several years, or even more, to regenerate. And now it is high time to start this process!

Regenerative agriculture – a response to the challenges of the modern world

Regenerative agriculture, to put it simply, is something in between conventional and organic agriculture. It is a golden mean which makes it possible to produce food of very high quality and in large quantities. It is a combination of good old practices, such as proper crop rotation, intercropping, biodiversity (or even permaculture), and integrated plant protection with the use of modern technologies of precision farming and optimal/minimal use of pesticides and artificial fertilisers. In short, it is a holistic approach to food production. For the benefit of the farmer, consumer and the natural environment.

This farming system is based on maintaining optimum pH and macro- and microelement proportions, minimum tillage, leaving crop residues in the field, using a larger number of species in crop rotation and growing cover crops, plus using natural fertilisers while reducing (but not eliminating) the use of artificial fertilisers and pesticides.

It starts with the soil

The farm is a source of income for the farmer, and the field and soil are the foundation of production. Therefore, it is so important to ensure that the soil is in good condition. To start with, the most important is soil analysis – its pH, content of organic residues, live organisms, and minerals. The latter are also very important due to interactions, including antagonisms between elements – an excess of one can limit the absorption of another by crops. This is the case of potassium and magnesium, for example. The soil pH also affects the availability of nutrients to plants.

Samples for soil testing are taken from many locations in the field, to ensure that the results are as reliable as possible. After the analysis the necessary actions can be optimally planned to reinstate biological, chemical, and physical balance in the soil, decide about aftercrop, and develop a fertilising plan.

The next step involves concrete agrotechnical procedures, including mainly soil tilling. It has a great impact on soil structure and fertility. There are three tillage systems: ploughing, no-till and zero-tillage (direct drilling). Increasingly often the scientists, but also practitioners indicate the no-till and direct drilling systems as the way to stop soil erosion, improve soil fertility and structure, and keep moisture in the soil.

Intercrops have similar effect, beneficial for the soil. They are plants which are sown in the field between the main crops or as temporal intercrops. They increase the biological activity and fertility of soil, loosen up the soil like a subsoiler, but some of them (legumes) also enrich the soil with nitrogen – thanks to which they are called green manure. Additionally, they protect the nutrients from leaching and provide organic carbon to the soil.

All of these factors have significant impact on the natural environment and the climate. As emphasised by the experts, if ploughing of all soils in the world stopped now, carbon sequestration (incorporation of CO2 from the air into the humus in the soil) could completely stop the greenhouse effect. There are many more advantages of biologisation (agrotechnical measures improving soil condition). Some of them include limiting wind and water erosion and reduced amounts of fertilisers entering the environment (including the waters).

For the farmer regenerative agriculture means lowering the costs of farming by reducing the number of sprays or fertilisers used, but also fewer trips in the field – which translates into savings of time and fuel. As to the latter aspect – the experience of biologisation ambassadors shows a reduction in fuel consumption by up to 50%! If we add an increase in yield and its quality thanks to healthier and more fertile soil – we have the full picture.

Studies confirm that changing the production system to regenerative farming may contribute to solving several significant global problems such as climate change, decreasing water resources, loss of biodiversity, agricultural pollution, but also human health problems.[2] Other experiments, carried out by American scientists show extraordinary benefits for consumers – food produced in the regenerative agriculture system has a higher content of minerals. Moreover, these minerals may reduce the risk of chronic diseases. Also grazing cattle or pigs with herbage from this type of cultivation increases the sensory appeal of meat as well as its nutritional value in terms of the correct composition of fatty acids for us.[3]

Reliable origin of food is the basis

Consumers today are already very aware. According to surveys they would happily buy food that is healthy and produced in a way that benefits the environment – in a regenerative way. However, as in the case of organic food, products coming from regenerative agriculture must be fully reliable. This reliability is built on production control and its certification. This requires above all transparency of the entire production process, strictly defined, uniform restrictions and standards.

Already farmers are ready to change production from conventional to regenerative farming: they have appropriate equipment and capabilities to do so. There is only a question of their education and awareness. This will come sooner than we expect. Why? The Green Deal being introduced by the European Union. Within its framework Poland has undertaken to reduce CO2 emissions and strive for climate neutrality. We have to use significantly less fertilisers and pesticides, and cultivate crops friendly for the climate and the environment.

Coming back to the certification of farms applying the principles of regenerative farming – the first solutions are already available in the market. One of them is the Biologisation Certification Programme of the Terra Nostra Foundation. Within its framework farmers have the support of agronomists who provide biologisation recommendations for farms. Additionally, a farm is audited by an external independent certification body and certificates are issued confirming production in accordance with biologisation.

The participation in the Programme is beneficial for farmers, producers and consumers. The former – thanks to healthier soil, saving inputs and fuel, but also time. Products with the Terra Nostra certificate can be sold at a higher price, and additionally it is possible to gain profit from sale of carbon credits and subsidies as part of eco-schemes of the new Common Agricultural Policy.

Producers can be sure of smaller carbon footprint of the product and the organisation, a certificate of carbon offset, a uniform, standardised product, and stability of supply of high quality produce from biological farms confirmed by an independent body.

As a result – last but not least – consumers have access to high quality, healthy, and wholesome food products. What is more, by choosing food from regenerative agriculture they contribute to the environmental protection, stopping climate changes, and restoration of healthy, living soils and clean water for the future generations.

The farms of the Top Farms group were the first to obtain a certificate confirming production in compliance with the principles of regenerative agriculture. It should be emphasised here that they have been pioneers of this new approach to agriculture for a long time. On the one hand, to the benefit of the environment and people, and on the other hand, for the quality and quantity of products made. At the end of the day, as always in business – it is not only profit that counts, but also social responsibility.

Material prepared by the Terra Nostra Agriculture Development Foundation co-financed by the European Union within the framework of the National Rural Network Action Plan for 2014-2020, Operational Plan for 2022-2023, submitted within the framework of the competition no. 6/2022 for partners of National Rural Network for the selection of operations to be implemented in 2022 and 2023 as part of the two-year operational plan for 2022-2023; RDP 2014-2022. 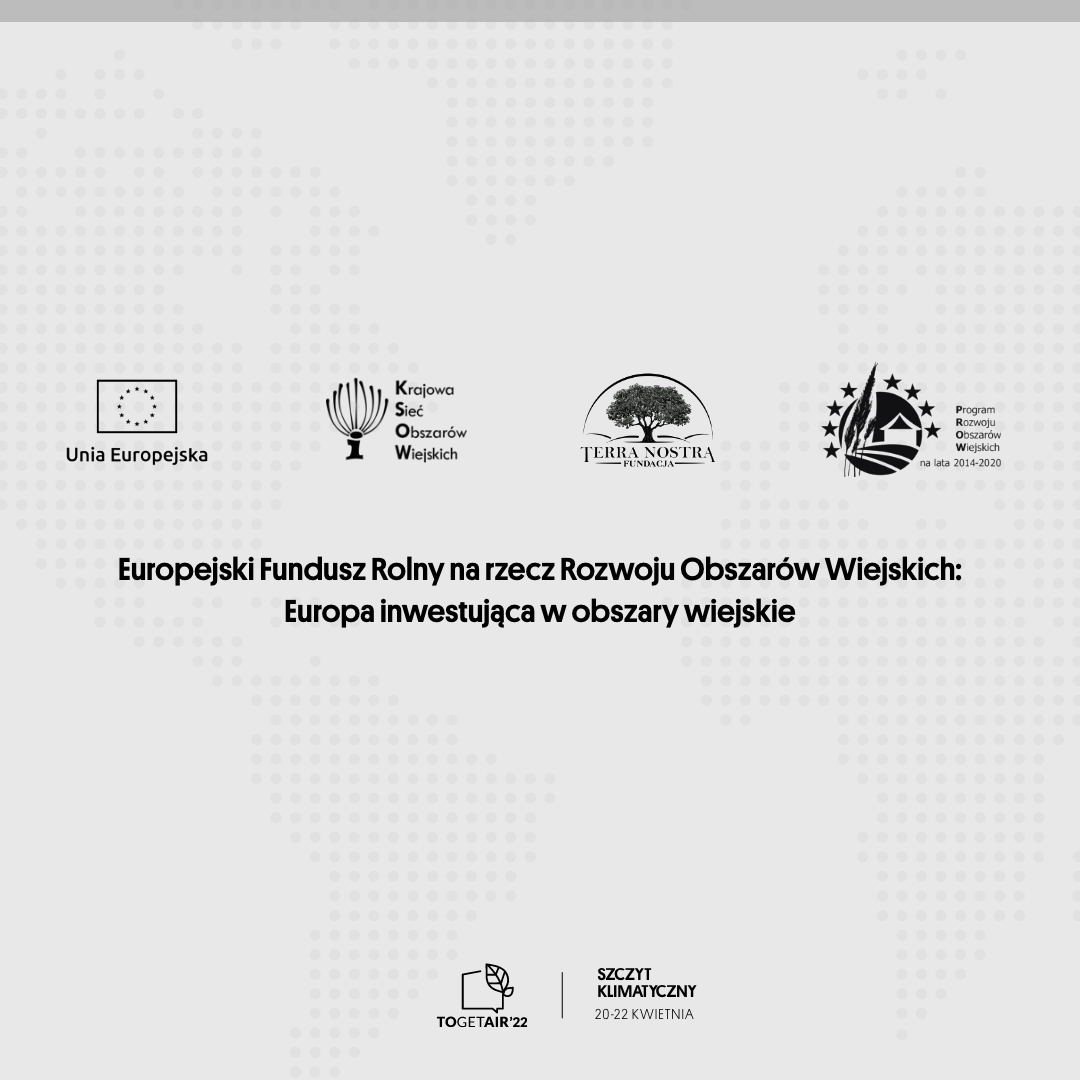 Climate change is a big challenge both on a global scale, but also on a regional and local scale
(R)evolution in food production – regenerative food