ecoMałopolska - we care about the environment

The Tatra, Pieniny, Gorce and Beskid ranges - a region with such treasures cannot be indifferent to the power of nature. The people of Małopolska have always lived in harmony with its rhythms. However, during several decades of intensive industrial and technological development, the environmental balance has been disturbed in all regions of Europe. Małopolska can be proud of the fact that the need to protect the natural resources of the environment was quickly recognised here, and the projects implemented to this end are an inspiration to other regional and local authorities.

Activities to improve air quality, prevent climate change, rational waste management, and protection of nature and landscape are linked by the ecoMalopolska project. Its most important tasks include the development and supervision over the implementation of the Air Protection Programme, preparation of the Regional Action Plan for Climate and Energy and support for residents in pro-environmental activities, which is facilitated e.g. by eco-advisors and the Eco-Intervention application.

The aim of the EcoMałopolska project is also to encourage the Małopolska residents to use ecological forms of transport: the Velo Małopolska cycling route network has been expanded, family cycling rallies have been organised, and environmentally-friendly public transport is to be ensured by the expanding network of connections on the Małopolska Railway. The eco-revolution has also reached the offices and units cooperating with them, eliminating single-use plastic products and reducing paper consumption. All environmental activities in the voivodship are supervised by the EcoMałopolska Council. 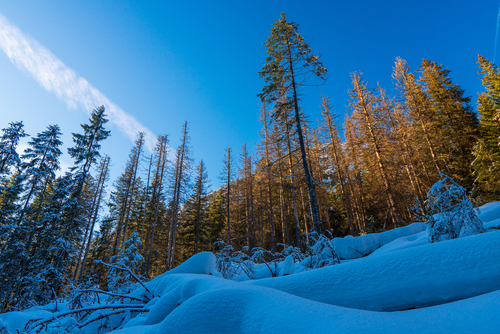 One of the priorities of Małopolska's environmental activities is the fight for clean air. As of 27 October 2020, an ambitious, innovative Air Protection Programme is in force in the region. This is a comprehensive project of actions to fight smog, ordering the duties of communes, poviats and the regional self-government in the light of regulations imposed by previously adopted anti-smog resolutions for Krakow and the entire Małopolska Region. The adopted regulations will make it possible, inter alia, to achieve a significant reduction in emissions of particulate matter in the atmosphere by 2023 and of benzo(a)pyrene by 2026.

- This will be possible if the people of Małopolska treat seriously the replacement of obsolete furnaces, the so-called " black-smoke-belching furnace " - emphasises Tomasz Urynowicz, Deputy Marshal of the region. - But they are not left on their own. For the past five years, under the EU LIFE Integrated Project "Małopolska in a Healthy Atmosphere", there have been over 60 eco-consultants in the region, who assist in making the decision to replace the furnace, fill out the documents, and obtain grants. The new Air Protection Programme obliges municipalities to create a service point for Poland's most popular subsidy programme "Clean Air". A heating cost calculator for different energy sources and a list of heating devices approved for use now and in the coming years in the entire voivodship is available at www.powietrze.malopolska.pl.

Małopolska for the climate

Since January this year Małopolska, as the only region in Europe, has been implementing the second LIFE EKOMAŁOPOLSKA integrated project - "Implementation of the Regional Climate and Energy Action Plan for Małopolska" with a budget of over PLN 70 million. The main objectives of the Project are the promotion of renewable energy sources, improvement of energy efficiency and a wide range of activities to counteract the effects of climate change.

A key activity of the LIFE-IP EKOMAŁOPOLSKA Project will be the development of climate action scenarios for the region until 2030 and 2050. A network of climate and environment advisors will be established in all districts. It is also planned to establish a Regional Competence Centre - a platform for cooperation and exchange of experience at local, regional, national and international level. In order to increase the potential of using renewable energy sources in Małopolska, an interactive map of RES potential will be developed, which will allow selecting the optimum solution for a specific location. A nationwide training programme on low-emission transformation of heating devices will be prepared.

-This project fits in with the whole list of actions we take for the environment. Promoting climate-friendly solutions and supporting local governments in the fight to improve the quality of the environment is one of the priorities of the Małopolska Voivodship. I am glad that thanks to this project we will be able to implement the Regional Action Plan for Climate and Energy - says Tomasz Urynowicz - Deputy Marshal of Małopolska.

The project will be implemented by the Małopolska Voivodship until 31 December 2030 and its partners are: Ministry of Development, Labour and Technology, Silesian Voivodship, AGH University of Science and Technology, European Clean Air Centre, Institute for Energy, Climate and Environment in Wuppertal (Germany) and Brandenburg Technical University in Cottbus (Germany), as well as Kraków, Tarnów, Nowy Sącz and 18 Małopolska counties.

The Fair Transition Mechanism is a tool for implementing the objectives of the European Green Deal and climate neutrality in the regions most exposed to the negative socio-economic effects of transition. Małopolska is one of the regions in Poland directly threatened by the effects of low-carbon transformation. Energy modernisation began here already in the 1990s. The closure of mines in Trzebinia, Brzeszcze and Libiąż during that period still has negative social, economic and environmental consequences.

- A fair energy transition is one of the biggest challenges facing Małopolska today - says Tomasz Urynowicz - Deputy Marshal. - We need greater environmental ambition, but also greater availability of resources, for example for modern investments or professional training. We see a great opportunity in obtaining funds from the EU's Fair Transition Fund. 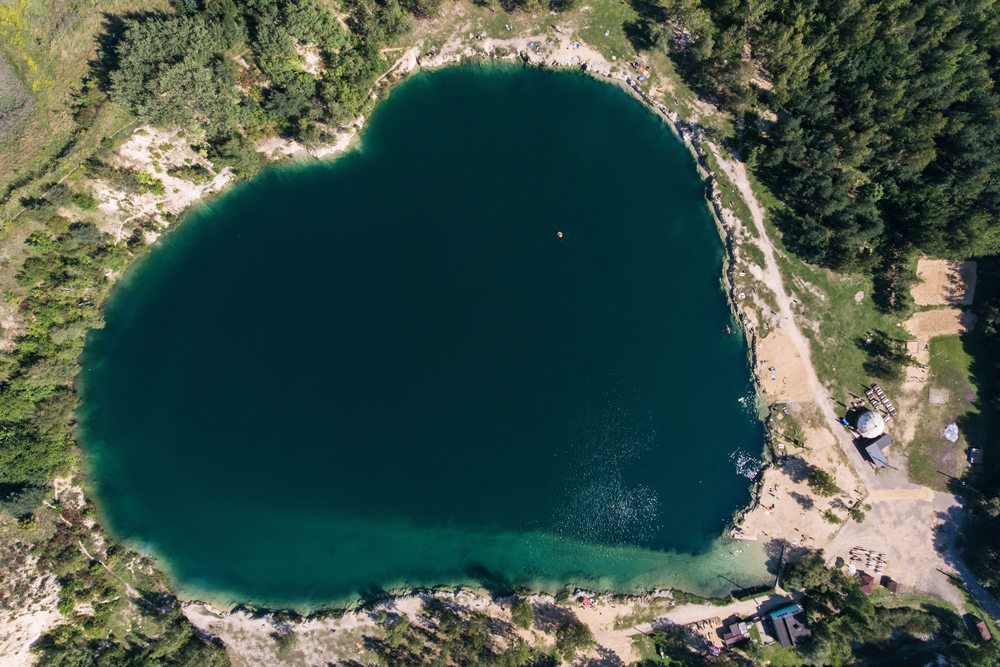 Activities in this direction are being carried out very intensively. In October 2019, the Małopolska local government launched the START project, as part of which experts from the EU Platform of Carbon Regions in Transition are helping the municipalities and districts of Western Małopolska to develop 4 pilot projects, mitigating the effects of the socio-economic energy transition

- We are one of 7 regions in Europe, and one of two in Poland, which received the technical assistance project START Platform for Coal Regions in Transition - says Deputy Marshal Tomasz Urynowicz. - In its implementation we cooperate with local governments, scientific institutions Tauron Polska Energia S.A. and Orlen Południe S.A. This cooperation has resulted in the preparation of a number of concepts of projects serving the energy transformation of the region and mitigating its consequences. By the end of the year alone, we received more than 60 pilot project proposals, with a total value of more than 4 billion PLN.

So that Małopolska can benefit from FST, it must prepare a Territorial Plan for Fair Transition. A special interdisciplinary team has been set up for this purpose, consisting of over 30 representatives from the world of science, business, government and local government administration and non-governmental organizations. Supervision of the preparation of the Territorial Plan for Equitable Transition was entrusted to Tomasz Urynowicz, the Board's Representative for Equitable Transition.

My waste, your raw material

Sustainable waste management is an equally important issue for the Małopolska local government as air quality. From the resident's point of view, they are connected by Eco-Intervention prepared under the LIFE Project "Małopolska in a healthy atmosphere". It is a free application which can be used to report activities harmful to the environment, such as suspected use of poor quality fuels or wild dumps.

The most effective measure to reduce the amount of waste is the so-called closed-cycle economy, where waste from one producer becomes raw material for another. Małopolska is striving to introduce this model, the regional Waste Management Plan has already been adopted, and the SYMBI project "Industrial symbiosis for sustainable regional development and resource efficiency in a closed-cycle economy" is being implemented.

In 2019, the Voivodship Parliament passed the declaration "Małopolska without plastic". - From now on, only ecological paper is used in the Marshal's Office and local government organizational units, and all plastic disposables have been abandoned. The so-called green public procurement imposes similar obligations on contractors of the Małopolska local government.

ecoMalopolska - we live according to nature 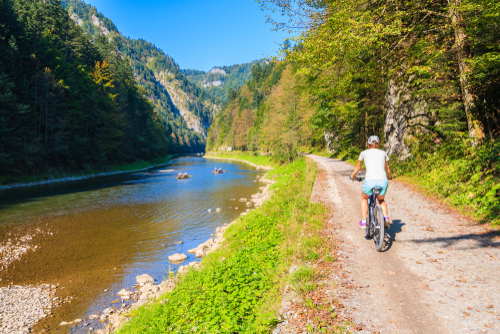 Sustainable transport plays an important role in the region. Koleje Małopolskie [Małopolska Railways] - a company established by the voivodship’s self-government - operates four regular lines offering transport within the Krakow agglomeration and access to the airport, as well as connecting the region's capital with other large cities such as Tarnów and Nowy Sącz.

Cycling enthusiasts will also find excellent conditions here, which is being intensively promoted in the region. Małopolska can be cycled from north to south along the VeloDunajec, and from east to west along the Vistula Cycling Route. The network of 8 VeloMalopolska routes was designed to reach every region of the voivodship. The cycling routes run through areas valuable in terms of nature and tourism, including the Niepołomice Forest: Niepołomice Forest, Pieniny and Tatra Mountains, as well as connecting major urban centres. The main VeloMalopolska routes are joined by local cycling paths and trails. 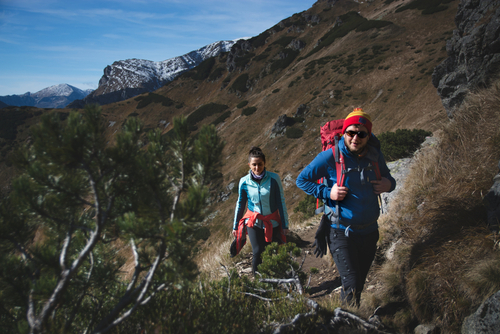 Within the framework of the ekoMałopolska project a number of "soft" activities are also implemented, building awareness and shaping pro-environmental habits among tourists and residents. In order to facilitate the latter's activity, the Board of the Małopolska Region announces open competitions for institutions of public benefit to co-finance pro-environmental activities. To communicate with residents, EcoMałopolska Internet TV and EcoMałopolska profile in social media are used.

Every year, the "Don't Litter My House" public awareness campaign aims to draw attention to the harm caused to animals by litter left in forests and along hiking trails. The educational action in the media is accompanied by suggestive posters, displayed, among others, at entrances to trails and in the buildings of national parks, landscape parks and forest inspectorates.

Every year, the ecoMałopolska stand can be found next to the open-air stage of the Krakow Green Film Festival, which has been ranked among the 100 most-watched film festivals in the world, and in front of the Franciscan Basilica on St. Francis of Assisi Day, celebrated as a festival of Christian ecologists.

The autumn campaign "Smog-free Małopolska", during which portable particle counters check the air quality in towns and villages, has a suggestive message for residents. A several-metre-long model of lungs, covered with a white filter fabric blackening under the influence of air pollution, emphatically illustrates the changes in the organism. The action is conducted with the Krakow Smog Alarm, one of the numerous ecological partners of the Małopolska Voivodeship.
Małopolska also conducts numerous educational and information campaigns and cooperates with regional media on an ongoing basis. Organized together with "Gazeta Krakowska", the Eko HERO Małopolska social plebiscite - a competition for communes, companies and organizations acting for the benefit of the environment - makes it possible to find, award and popularise good practices in environmental protection.
- We appreciate the qualities of the region in which we live. This makes us feel even more obliged to preserve for future generations a green Małopolska with a clean environment, balanced economy, whose residents live responsibly and comfortably," sums up Tomasz Urynowicz  - Deputy Marshal.