On the one hand, the voivodeship is trying to relieve the burden on the environment, focusing on the development of waste management and air protection, and on the other hand, it supports nature, e.g., in its own capacity for water retention. At the same time, it eliminates many years of neglect and introduces solutions which are unique on the scale of the country.

Świętokrzyskie is the region with the most valuable natural areas and areas under legal protection in Poland (as much as 65%), but unfortunately its forests still receive a lot of waste. The region has a high potential for mineralised water exploitation, which is an opportunity for spa tourism. However, a barrier to its development is air pollution, the source of which is mainly low emissions from households.

Another asset of the voivodeship is diversified agriculture, which also includes ecological production. However, there is also a disadvantage connected with it - dispersed and fragmented settlement structure which also influences the voivodship's underdevelopment in the field of technical infrastructure. Such a problem is for instance the insufficient level of the sewerage system in relation to the number of waterworks in municipalities, which creates a potential threat of municipal sewage water pollution.

The waste policy instrument in the voivodeship is the "Waste Management Plan for the Świętokrzyskie Voivodeship". In order to create an integrated and sufficient network of municipal waste management facilities in 2012, the plan defined a system based on six regions, each covering a minimum of 150,000 inhabitants. In each region one regional waste management facility was indicated, which was to ensure processing of mixed municipal waste, green waste and other bio-waste and storage of waste generated in the process of mechanical and biological processing of mixed waste and residues from sorting of municipal waste from the area of the given region. All installations operating within the system are managed by units established by municipalities. After eight years of operation of this system, it may be said that it has been fully successful in meeting the needs of the voivodship's inhabitants. It should be stressed here that the prices of municipal waste management were among the lowest in the country.

At present, the implementation of investments concerning, inter alia, selective waste collection and waste recycling facilities is under consideration, taking into account the transition to a closed-cycle economy. The need to develop a network of selective collection points for municipal waste (PSZOK) has been recognised, including their expansion to include repair and reuse points. They play an increasingly important role in the waste management system, including in the prevention of waste generation, and are increasingly popular among residents. It should be noted that in 2017-2019, more and more selectively collected municipal waste was transferred for recovery, including recycling and reuse, which allowed most municipalities to achieve increasingly higher indicators in this respect. However, taking into account the high requirements imposed on municipalities by the law, the local government of the province undertakes various initiatives to inform and consult its intentions. This is positively received both by municipalities and local entrepreneurs.

In 2021 and subsequent years, municipalities are obliged to achieve levels of preparation for reuse and recycling of all municipal waste, from 20% in 2021 to 65% in 2035, which will be a huge challenge for them. In order to achieve better and better results in waste recycling, it is necessary to create and develop selective municipal waste collection systems (e.g. locating smart electronic waste bins), including the collection and reception of bio-waste, implementation of IT solutions to increase the efficiency of selective municipal waste collection, creation of repair and reuse points and, above all, the creation of waste recycling infrastructure, e.g. for sewage sludge, plastics and glass.

In the field of municipal waste management, there are areas for continuous improvement, in particular the development of the implementation of a closed loop economy. Thus, it is crucial to prevent waste generation and to treat waste - at all stages of the product life cycle - as raw materials. A modern approach is also required for the collection and treatment of bio-waste and its processing into bioproducts.

Pro-ecological activities planned and consistently carried out in recent years by the local government of the voivodeship bring positive effects. This is most clearly visible in the field of air protection.

Last year was particularly intensive, as work was carried out on implementing two effective demand-generating instruments for heat source replacement and thermo-modernisation. These are resolutions of the Świetokrzyskie Voivodeship local government assembly on 24 July 2020 concerning the definition of the air protection programme for the Świętokrzyskie Voivodeship together with a short-term action plan and on the introduction in the Świętokrzyskie Voivodeship of restrictions and prohibitions on the operation of installations in which fuels are burned (so-called "anti-smog resolution"). Unfortunately, the pandemic is ongoing and local governments are struggling to spend funds to combat its effects and help residents and businesses. And yet, thanks to good cooperation between government and local administration, popularisation of support programmes and implementation of corrective measures of the new programme brought unexpected results. In less than half of last year alone, 4,500 inefficient solid fuel heat sources were eliminated or replaced.

Of course, the implementation of the provisions of these important documents would not be possible without ensuring adequate funding. The Świętokrzyskie Voivodeship Board has made every effort to enable all beneficiaries to benefit from external funding sources. Under the Świętokrzyskie Regional Operational Programme 2014-2020, nearly EUR 180 million has been spent on projects involving the generation and distribution of energy from renewable sources, increased energy efficiency, including in businesses, energy modernisation of buildings, the construction of cycle paths and urban mobility, i.e., primarily on projects that contributed to reducing emissions of dust and harmful substances into the atmosphere. For the next programming period, the voivodeship authorities are negotiating EU funding of €276 million for this purpose alone.

Prioritising the promotion of renewable energy sources, the Świętokrzyskie Voivodeship has implemented the RDI2CluB project "Rural RDI milieus in transition towards smart Bioeconomy Clusters and Innovation Ecosystems". This is a flagship project in the bioeconomy policy area of the European Union Strategy for the Baltic Sea Region (EUSBSR). It was conducted jointly by 5 countries - each represented by a consortium composed of representatives of administration, science and business. In Poland, the task was led by the Marshal's Office of the Świętokrzyskie Voivodeship, the Regional Science and Technology Centre and the Pro Civis Foundation for Education and Social Dialogue. The leader of the whole project was the JAMK University of Applied Sciences of the Central Finland Region. [LINK]

The project contributed to the popularisation of low emission and its threats. It is no coincidence that the spa municipalities of Busko-Zdrój and Solec-Zdrój, where the pilot actions were implemented (including measurements of air pollution levels using a drone), are among the most active local governments in Świętokrzyskie, acquiring funds under umbrella projects to co-finance the replacement of outdated coal-fired furnaces with environmentally friendly, renewable energy sources. The project's innovation includes a focus on the role of regions and local communities in the development of a bioeconomy, which means taking care of nature in a broad sense combined with innovative solutions that support the local economy - this has been achieved through the development of regional bioeconomy profiles for partner regions and action plans to develop regional bioeconomy ecosystems. As part of the international pilot, a digital platform Biobord.eu was also created as a virtual working environment and meeting place for bioeconomy enthusiasts. It has been a great success in the region in raising awareness about the bioeconomy and its importance among different groups, through various events and promotional activities, including online activities for children and seniors. This has resulted, among other things, in an original project by the youth council of the Świętokrzyskie Voivodeship and the youth council of Miedziana Góra called Smog Out, which includes educational activities on air quality and the fight against smog. The youth assembly also set up an environmental commission with a real impact on the regional documents and decisions of the regional authorities on environmental issues that are being developed. Above all, the RDI2CluB project has helped to initiate a discussion on bioeconomy and closed loop economy, at a time when the Świętokrzyskie region is formally redefining its development directions for the next years. For the first time bioeconomy was mentioned by name in such important documents as Świętokrzyskie Voivodeship Development Strategy 2030+ and Regional Innovation Strategy.

What does the local government do

In order to solve the problems of wastewater management, particularly in small villages with dispersed housing, Poland's only "Programme for the Construction of Domestic Wastewater Treatment Plants in the Świętokrzyskie Region" was developed and adopted. This strategic document has been very helpful for many years in obtaining financial support from both national and EU funds. This programme - as an example of good practice - was included in the "National Ecological Policy 2030". Under this programme, nearly 9,000 facilities have been put into use since 2008, and the monitoring and evaluation of this programme has shown measurable benefits for the environment in terms of improving the condition of surface and groundwater.

Moreover, recognising that environmental education is a very important tool for the implementation of any tasks, we are constantly conducting educational campaigns, such as: "What I burn in the furnace, I breathe", "Don't make the world grey" - by organising conferences, workshops, distributing films, spots and talks with experts, leaflets, information materials or posters. In addition, dedicated tabs have been created on the website of the Marshal's Office www.swietokrzyskie.pro: AIR PROTECTION and WASTE MANAGEMENT, as well as on the office's facebook profile RDI2Club_Swietokrzyskie. 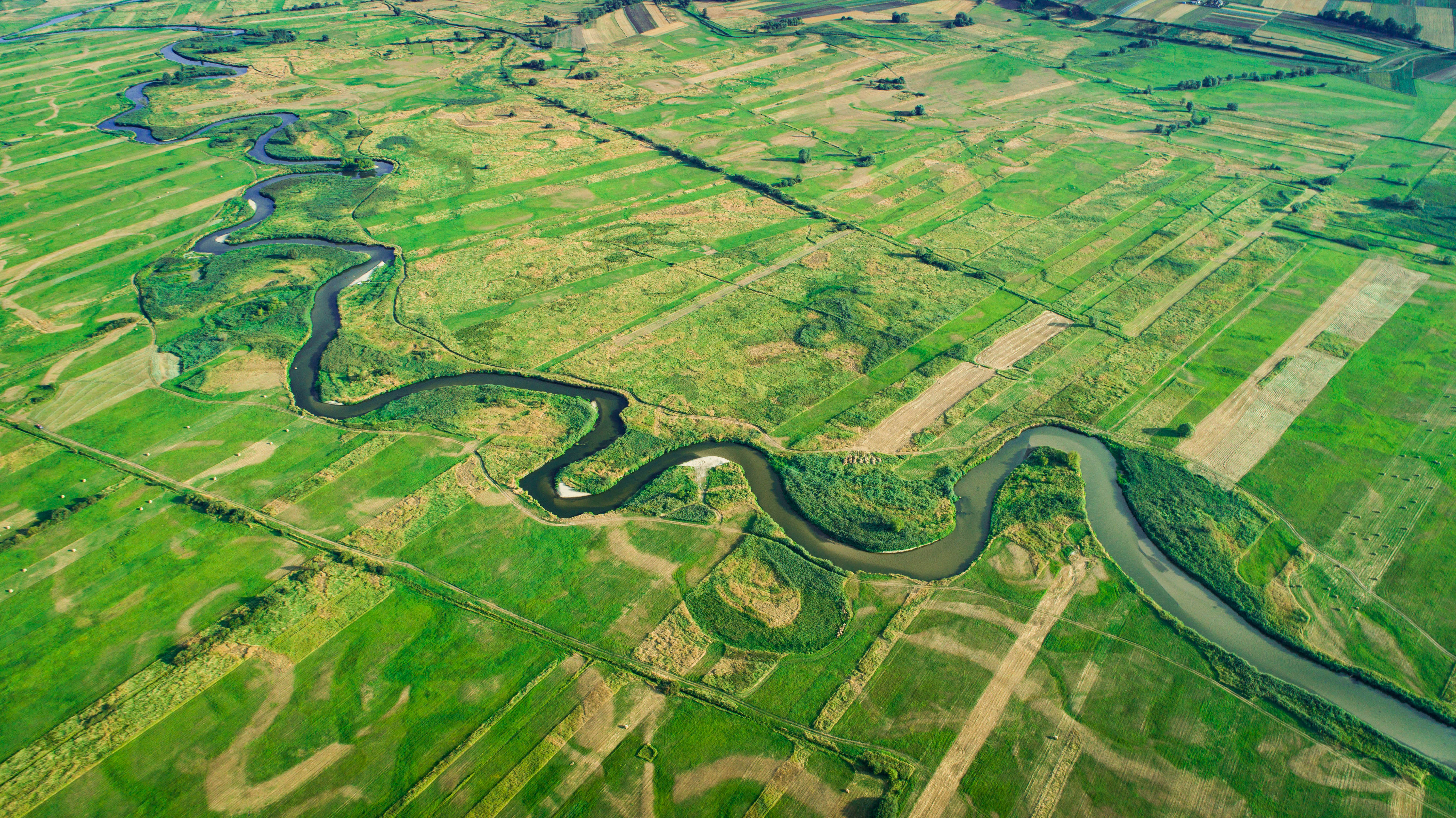 In order to restore valuable natural habitats, the LIFE4Delta_PL project is being implemented, which is closely linked to water retention in the area of the so-called inland Nida delta near the village of Umianowice, municipality of Kije. Insufficient flows in local watercourses and lack of retention of outflowing water after winter led to a decrease in its level. Marsh vegetation was replaced by bushes and trees and lush and flowery meadows turned into reed monocultures. In order to counteract the water shortage, specific measures have been taken which will increase the retention of meadows in the near future. Thanks to damming, it will be possible to saturate the soil profile of the valley. Considering the project area and the surface of the meadows where the water will spill over, a huge reservoir of fresh water (approx. 3 million m3) will be created at a relatively low cost. In case of weather anomalies, the unblocked watercourses will allow efficient drainage of stored water making room for new water, and thus contribute to reducing the risk of local flooding or partial inundation, flattening the potential flood wave. Analogous actions were taken in the biggest in Świętokrzyskie Voivodship incubation forest complex in Młodzawy near Pińczów, where water shortages started to change the forest habitat. Similarly, as in the Delta area, water in sufficient quantities for surface flow will be stored here. The water stored in the project area will bring life to new generations of the ecosystem. It will improve the local microclimate. It will initiate habitat restoration, creating areas attractive for settlement by rare plant and animal species, at the same time becoming a tourist attraction. In addition, rational water damming will reduce the possibility of local flooding and partial inundation.

Silesia under the blue sky
Greater Poland: It feels lighter to breathe, but the smog continues to poison