Contrary to popular belief, the Voivodeship does not become a desert but, just like the whole country, it experiences the effects of climate change, and most of all water scarcity. The local government of the region undertakes many activities to counteract the effects of these phenomena.

The Lodzkie Voivodeship is facing problems resulting from climate change, but also from human activity, in terms of water and air quality. A large part of agricultural and forest areas is highly endangered by agricultural drought, which is manifested, for example, by the periodic lack of water in smaller rivers. Therefore, one of the major challenges faced by the region is rational water management, including rainwater management at the place where it falls and subsequent water retention.

In order to meet these needs, the local governments of the Lodzkie Voivodeship undertake various activities: planning, investment and educational, to enable the adaptation of cities to climate change and extreme weather phenomena such as storms, progressive water shortage and urban heat islands. 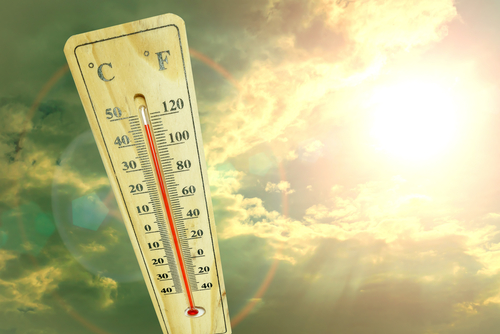 Climate change and the associated extreme weather phenomena (higher and higher air temperatures, strong sunlight, rainfall deficit, droughts) cause a water deficit in the soil and a reduction in surface, ground and underground water resources. The northern and north-western part of the Voivodeship, as well as the Bełchatów region, are struggling with water shortage during the growing season. Therefore, in the Lodzkie Voivodeship there is a significant share of agricultural and forest areas that are strongly threatened by agricultural drought.

Based on the data from 1971-2000, an increase in the average annual temperature of 2 to 3° C can be noticed, especially in the northern and western part of the Voivodeship. Anomalies were also noted in the annual total precipitation and their decrease from 10 to 30%, resulting in the appearance of a low rainfall zone (less than 400 mm per year) covering the north-western and western part of the Voivodeship. An additional factor conducive to drought is the lowest forest cover in Poland and a very low retention capacity of the catchment area. The problem of water shortage is felt in the area of the depression cone caused by the activity of the Bełchatów Brown Coal Mine.

The emerging reports about the "desertification" and "steppe-formation" of the Łódź Province are far from the truth. Desertification is the process of the expansion of deserts in areas where they were not observed in historical times. In the Lodzkie Voivodeship, such a phenomenon does not occur and there is no steppe process, understood as the transformation of forested areas, shrubs and meadows into grassland biomes: steppe or prairie. On the contrary, meadow positions in protected areas usually require active protection, i.e. mowing, to avoid secondary forest succession. Also the slopes of the brown coal open pit of the Bełchatów field, located within the range of the so-called depression crater is gradually overgrown with vegetation and forest. It is important to use reliable expressions to describe reality in a responsible manner because based on the diagnosis decisions are made about multi-billion dollar current and long-term economic and geopolitical costs.
It must be admitted that in the Lodzkie Voivodeship periodically there is a phenomenon of drought understood as a long-lasting (over a month) period without rainfall and the related drying of the soil. Moreover, surface water resources are relatively small due to the very low retention capacity of the catchment area, and their quality is poor.

Agricultural drought is not the only problem. Urban centres, especially the largest ones, have to adapt to climate change, which is manifested by such weather phenomena as heat, torrential rains and sudden often urban floods. The effect of precipitation of very high intensity and short duration, combined with difficult water infiltration and often clogged rainwater drainage systems, are flooding. The area of the greatest accumulation of problems related to extreme phenomena are cities with more than 100,000 inhabitants. Łódź is exposed to 3 out of 10 major climatic threats, i.e. heat, heavy rainfall and storms, and urban floods. Negative climatic phenomena also occur in rural areas, where strong winds damage buildings and overhead transmission lines.

The total costs of drought and extreme weather phenomena are difficult to estimate, as they are borne by many entities: local governments (costs of repairing infrastructure damage),  businesses (e.g. costs resulting from greater use of cooling infrastructure) and farmers (crop losses), as well as residents in the region (health costs). The strictly environmental costs related to e.g. higher groundwater abstraction for irrigation of fields and carbon dioxide emissions as a result of the increased energy demand for cooling systems.

The key anticipatory actions were indicated in the "Strategy for the Development of the Lodzkie Region 2030", where one of the challenges was the high risk of drought and other extreme weather and climate phenomena. It was reflected in the strategic provisions of the operational objective 3.1 "Adaptation to climate change and improvement of the quality of environmental resources", for which many directions of activities related to responding to problems of drought and extreme phenomena were defined. Moreover, under the operational objective 3.2. “Landscape protection and shaping” includes activities that have a positive impact on reducing the effects of drought.

Indirectly, the improvement of the region's adaptation abilities to climate change will also have the measures provided for in the horizontal objective: “Effectively and responsibly managed Voivodeship" related to the implementation of an integrated and territorially oriented policy of sustainable spatial development, under which it is planned to support communities in spatial planning processes and raise awareness of threats related to the lack of sustainable spatial policy. In the longer term, activities aimed at reducing greenhouse gas emissions within the operational objectives 3.3 are also important. “Increasing transport accessibility and 3.4. "Modern energy in the Voivodeship".

An important action aimed at reducing water shortages was the commencement of dialogue by the Marshal of the Lodzkie Voivodeship with the State Water Management "Polish Waters". On May 28 2020 the marshal signed an agreement with the president of PGW setting out the principles of cooperation in shaping water resources in the Voivodeship. The parties to the contract declared close cooperation in the field of water management, in particular regarding increasing water retention and restoring the functionality of drainage systems.

Local governments were also involved in the fight against the effects of climate change. Łódź1, Bełchatów2 i Tomaszów Mazowiecki3 already have municipal plans for adaptation to climate change. Some (Bełchatów, Brzeziny, Łódź, Pabianice, Radomsko) have also prepared revitalisation programs for degraded areas. In addition, local spatial planning more and more often includes solutions that facilitate the adaptation of cities to climate change. The rules of rainwater management are established, with the use of surfaces such as concrete and asphalt is banned, and the share of biologically active surface or the possibility of creating green roofs is also determined.

Unfortunately, despite the growing awareness of the inhabitants and local development managers in the cities of the Lodzkie Voivodeship, investments counteracting water shortage are still implemented to a modest extent. The majority of investments go to creating small retention reservoirs, ponds, green roofs and green walls, rain gardens, green areas as natural retention areas (e.g. flower meadows), and new permeable surfaces. So far such investments have been carried out, for example, in Bełchatów, where a pocket park has been created, allowing pedestrians to easily pass through the green passage4, and in Pabianice, where the Pabianickie Zielone Podwórka program was launched5, improving the quality of greenery in inter-residential areas. 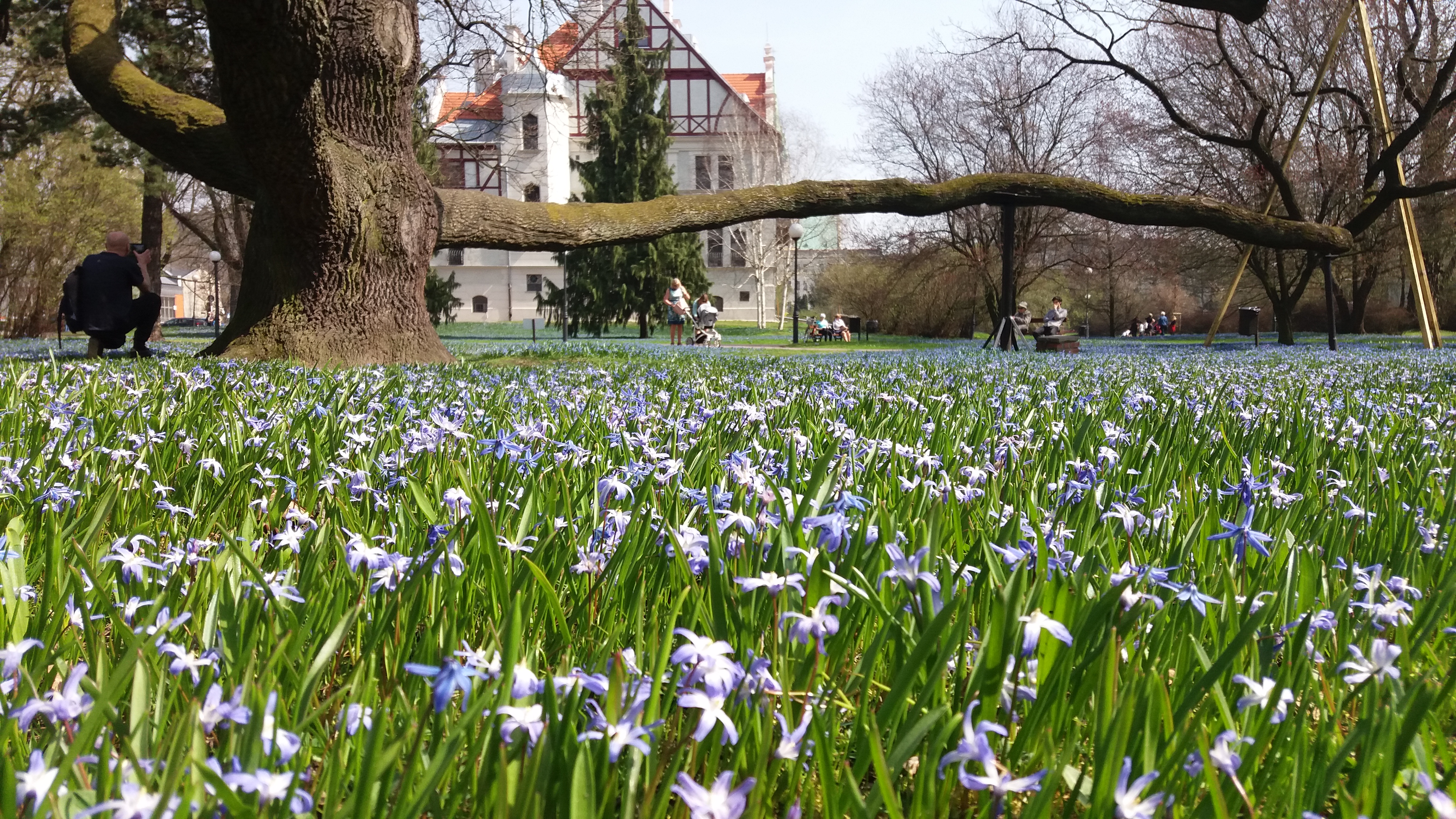 Most investments were carried out in Łódź, but the effects of these activities are disproportionate to the huge scale of needs. The city manages rainwater, which is favoured by new plantings and green areas, e.g. woonerfs (living streets) in the city centre, squares and pocket parks. The latter were built as part of the revitalization of the centre7 of Łódź and in Stary Polesie. Gardens are being built on the roofs of office buildings and public buildings in Łódź8 and the largest one will be located at the Orientarium, which is currently under construction.9 Rain gardens are also becoming a popular element of urban design. In 2020 a garden was created at the Rozgrywka Library in Lodz10, and in the years 2021-2024 100 such investments are to be built as part of the program “Lodz Schools for Climate. Local adaptation actions.”11 Solutions involving the use of rainwater for the care of greenery were used in the didactic and experimental garden at the Faculty of Biology and Environmental Protection, University of Lodz.12 Similarly, all greenery in the new Orientarium and its surroundings will be supplied with rainwater collected in underground reservoirs.

In a large part of the Voivodeship's cities, it is more and more common to unseal the surface, for example, through the use of an openwork surface that permeates rainwater in parking lots (e.g. in the A. Mickiewicza park in Łódź and in another park in Sieradz) or maintaining green tram tracks (e.g. in an area of Aleja Piłsudskiego). Nevertheless, many new investments still do not take into account the needs of cities to adapt to climate change. Examples include modern office buildings in the centre of Łódź and revitalisation of historic markets (e.g. Warta and Skierniewice).

It is also important to educate residents on how to rationally manage water. This was emphasised in the strategies of adaptation to climate change in Bełchatów and Tomaszów Mazowiecki. Numerous initiatives are bottom-up and are implemented at various levels of pre-school and school education.

Advisory publications are issued (eg: "Let's fight the drought together", "How to water properly", "Precious rainwater - a short guide on how to keep it on the plot", "Łódź catches rainwater", "Standards for the care of lawns and urban meadows in Łódź").13